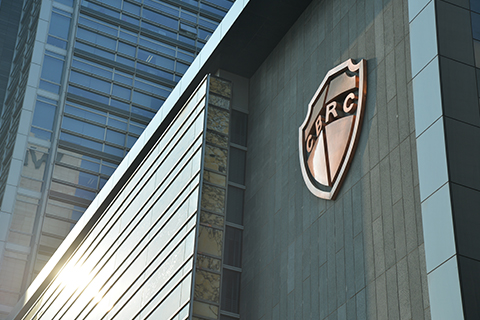 The banking regulator has punished 21 financial institutions over the Guangfa Bank scandal. Above: The headquarters of the China Banking Regulatory Commission in Beijing. Photo: Caixin

The 13 institutions violated lending rules by helping China Guangfa Bank to conceal bad assets, the China Banking Regulatory Commission said on Friday. The regulator said it confiscated a total of 661 million yuan in illegal income and handed out same amount of fines, bringing the total sanction to more than 1.3 billion yuan

“The violations of these institutions are serious and have caused severe consequences. They must be harshly punished to send a warning to the industry and market,” the banking regulator said in the statement posted on its website.

Earlier this month, the banking regulator handed out its biggest financial penalty ever – totaling 722 million yuan ($109 million) to China Guangfa Bank for fabricating guarantee documents on 1 billion yuan worth of bonds that went into default. The bank was also found to have hidden bad assets and operated with lax internal controls that enabled wrongdoing.

With the latest 13 sanctions, the total number of financial agencies punished in the case reached 21. Meanwhile, more than 45 bank executives were punished with financial fines, demotion or bans on being part of the industry.

The 13 institutions provided a total of 10 billion yuan – part of which was in wealth-management funds raised from depositors – to Guangdong province-based electronics manufacturer Cosun Group by channeling the funds through other banks or trust firms to skirt lending rules, Caixin has learned.

A Guangfa branch in Huizhou, Guangdong province, provided guarantee to these loans, most of which were used to repay Cosun’s borrowing from Guangfa.

The wrongdoing was exposed when regulators investigated Guangfa’s role in a default case of 1.1 billion yuan worth bond issued by Cosun. The bonds were sold through an Ant Financial Holdings-backed online wealth-management platform in 2014 to help Cosun repay bank loans. But Cosun failed to pay back the bondholders in December 2016.

However, Guangfa said the documents – with seals of its Huizhou branch – were fake.

The bank regulator said after an investigation that employees of Guangfa’s Huizhou branch had colluded with Cosun to fabricate loan-guarantee documents for Cosun to issue bonds and obtain other financing, totaling 12 billion yuan, as the bank tried to conceal its huge amount of non-performing assets and operational losses.

At the time, the bank regulator said the case was “severe and its social impact is extremely bad.”

These institutions used various methods to provide huge loans to a risky company and caused contagion of financial risk among institutions, the banking regulator said on Dec. 22.

The banking regulator said Friday the 13 institutions as fund providers failed to meet business compliance requirements and to conduct thorough due diligence. They also blindly expanded business without necessary risk management and efforts to know their clients.