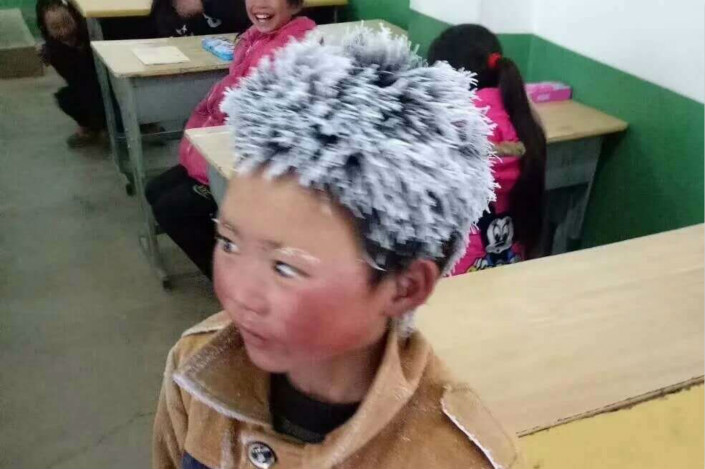 This photo of third-grader Wang Fuman, of Yunnan province, triggered an online discussion earlier this month on the plight of rural students who have to walk great distances in the cold to get to school. Photo: IC

Alibaba founder Jack Ma has called for closing schools with fewer than 100 students and opening up boarding schools instead to improve rural education.

An education expert said the e-commerce entrepreneur-turned-philanthropist was echoing a now-defunct government policy that led to “new problems” instead of improving access to schooling in isolated communities.

Ma floated the idea of boarding schools, as a preferable alternative for students in remote areas, during a forum organized by his charitable foundation, which drew about 80 business leaders and philanthropists in the resort island of Hainan over the weekend, the state-run China News Service reported.

“From my own experience, schools with fewer than 100 students can’t operate effectively,” Ma said. “That’s because smaller schools don’t have enough resources and infrastructure to attract good teachers.”

His call came seven years after the government put an end to a decadelong drive to close thousands of small rural schools.

An online debate on the plight of rural students was triggered earlier this month by photos of an 8-year-old — whom netizens dubbed “Ice Boy” — arriving at school with swollen hands, and with his hair and eyebrows covered in frost.

The third-grader, who was later identified as Wang Fuman from Ludian county in Southwest China’s Yunnan province, walks 4.5 kilometers on his own every day to get to school, according to his teacher, who took the photo. It isn’t clear whether Wang has to walk so far because primary schools closer to his home had been shut down earlier.

Ma weighed in on Wang’s hardships during the meeting, saying Wang should have been sent to a boarding school.

However, Ma’s suggestion isn’t backed by any studies, and he has only touched on one of many issues that education authorities in rural areas are grappling with, said professor Chu Zhaohui at the National Institute of Education Sciences.

The number of rural schools, particularly those in remote villages, is dwindling because of a decline in demand amid rapid urbanization over the past two decades, Chu said. “Closing smaller schools and sending students to larger township- or county-level schools, with better resources, has created new problems,” he said.

The Ministry of Education called off the push to close small rural schools in 2011 amid a public outcry after several children died in fatal school bus accidents.

In one incident, 15 primary school students were killed and eight others injured in a school bus accident in Feng county, or Fengxian, Jiangsu province, in December 2011. The unlicensed 52-seat bus was carrying 70 students when it overturned and crashed into a ditch.

There have also been reports of students as young as 7 years old being forced to cook their own meals in hastily built boarding schools, which lacked proper kitchens and canteen facilities and had a shortage of teachers.

Local governments need to come up with a comprehensive plan to improve oversight on privately run school buses to ensure safety and boarding schools, among other issues, if they want to improve the education system in rural areas, Chu said.