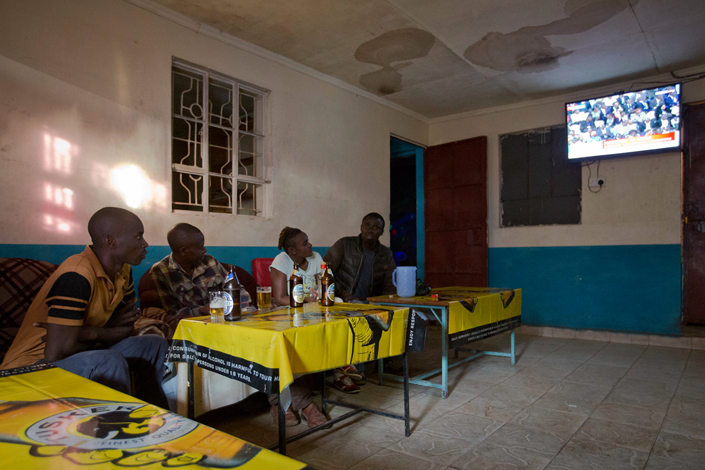 People watch a television broadcast of the results of presidential elections in Nairobi, Kenya, on Oct. 30. Kenya is one of 25 African nations where the Chinese government is attempting to help more locals access satellite TV. Photo: IC

China has signed an agreement with the oil-rich West African nation of Guinea to bring satellite-TV services to more than 300 villages, reflecting Beijing’s ongoing soft-power push in the continent.

The agreement is part of China’s ambitious plan to provide such services to 10,000 villages in 25 African countries by the end of 2018. The plan builds on a concept introduced by President Xi Jinping in 2015 at the sixth Forum on China-Africa Cooperation, held in Johannesburg.

China’s Ministry of Commerce on Tuesday announced the deal, which was signed last month. Beijing-based StarTimes Group, which offers direct-to-home pay-TV services, will carry out the project, according to the Chinese Embassy in Guinea.

StarTimes will provide satellite dishes for free and is expected to charge the equivalent of a $1 subscription fee per month, StarTimes Vice President Guo Ziqi said.

“Before we entered this market, the average fee for a cable or satellite TV package for a family was about $40 dollars per month,” Guo said. The company, with nearly 10 million subscribers in 30 African countries, said they aim to introduce more Chinese TV series that “combine both African and Chinese cultural elements” and “become a channel for cultural exchange.”

Its packages currently include several local African channels and a wide selection of Chinese news, entertainment and sports programming.

Beijing has rolled out similar trials projects in villages in Tanzania, Mozambique, Kenya and Uganda.