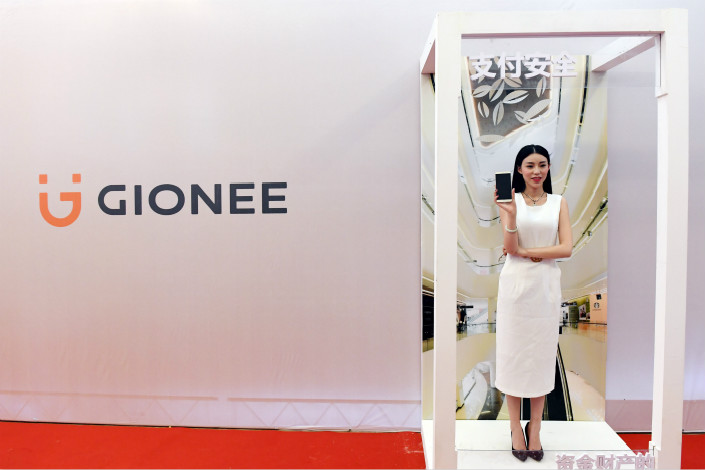 Gionee Communication Equipment Co. Ltd. released its new M6 and M6 Plus models in Zhengzhou, Henan province, on Jan. 6. The smartphone-maker is planning to introduce its products to more Central and Southeast Asia nations this year. Photo: Visual China

Gionee, a strong second-tier player in China’s smartphone market, said it will expand its footprint to more Southeast and Central Asian countries this year as it attempts to return to growth in the intensely competitive space.

Gionee Communication Equipment Co. Ltd. is one of the more globally diverse among a crowded field of Chinese smartphone brands, and was also one of the first to discover an Indian market that has gone on to attract most of its hometown rivals. But the company has stumbled in the past year as it was overtaken in India by more-market-savvy Chinese rivals, and sales in its home market also slipped.

Building on its launch in Thailand last year and presence in the Philippines, Myanmar, Indonesia and Vietnam, Gionee plans to launch in other Southeast Asian markets this year, the company said without elaborating. It added it will also target “Belt and Road” countries, a reference to China’s plans to help develop infrastructure for countries along the ancient Silk Road that passed through Central Asia, and a maritime Silk Road passing around the Horn of Africa.

“In the upcoming era of FullView Display, the company will further explore the vast overseas markets and bring its leading products and mobile experiences to more global users,” the company said, in reference to its newest models that follow an industry trend to boost the size of a phone’s display as a percentage of total surface area. Gionee is banking on those new models to rekindle its flagging growth, which dipped into negative territory last year.

In addition to its current Southeast Asian presence, the company now sells its phones in the African markets of Nigeria, Kenya and Egypt, as well as the Asian markets of Nepal, Kazakhstan and Georgia.

Despite that diversity, the company still gets the lion’s share of its sales from China and India, which combined accounted for 96% of its total shipments in the first nine months of last year, according to data tracking firm IDC. The company was the world’s 11th-biggest smartphone brand with about 2% of the global market during that period, though its global sales were down 12% during that time due to stiff competition from more aggressive rivals like Huawei Technologies Co. Ltd., Xiaomi Inc. and Oppo Electronics Corp.

“A few years ago, Gionee showed some signs of promise by getting into the critical India market a year or so ahead of some of its Chinese brethren like Xiaomi and Oppo,” said IDC analyst Bryan Ma. “But just being early doesn’t guarantee success. Xiaomi in particular outgunned it by developing a strong following via ongoing engagement and interaction with its users.”