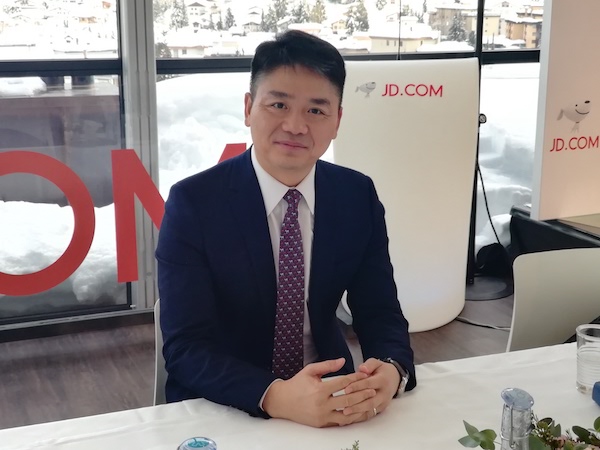 (Davos, Switzerland) – E-commerce giant JD.com Inc. is raising money for its logistics unit with an eye to an eventual independent listing, as part of a broader strategy to separate out its four main business areas for separate development, its chief executive said on Tuesday.

The new fund-raising comes as China’s No. 2 e-commerce company prepares to ramp-up its global expansion, which will focus on the Southeast Asia region this year before moving on to Europe, chief executive Richard Liu told a group of reporters on the sidelines of the World Economic Forum happening this week in Davos, Switzerland.

“We can confirm our logistics unit is currently raising money for a future independent listing,” he said. “We hope it can list in Hong Kong or in China. But it is still too early to say when or where.”

Liu disclosed the fund-raising and spinoff plan less than half a year after JD announced a similar move for its finance unit, also paving the way for an eventual separate listing. That listing would probably occur on one of China’s domestic markets due to restrictions about foreign ownership of financial firms. But such restrictions wouldn’t apply to the logistics unit, Liu said, leaving Hong Kong open as a potential listing ground.

The two spinoffs are part of a broader strategy that has JD.com looking to separately monetize its four main business areas, including its core e-commerce, logistics, finance and technology. The company has been investing heavily in all four areas, with the result that it is the only one of China’s four largest internet firms that has yet to report consistent profits. Liu declined to comment on when in the future he hopes to achieve sustained profitability for his company.

Separately, he said JD.com will accelerate its global expansion this year, following previous moves into the Southeast Asian markets of Indonesia and Thailand. The company announced its purchase of a major stake in a Vietnamese e-commerce company earlier this month, and Liu said this year it will consolidate its Southeast Asia push with moves into the Philippines, Myanmar and Malaysia.

“We will get all of Southeast Asia. Our next step would be Europe to build a ‘buy center’ for Europe,” he said, explaining that JD’s overseas moves have a two-pronged approach of taking China’s best products to other markets, and also of bringing foreign products to Chinese shoppers.

JD.com and rival Alibaba Group Holding Ltd. dominate China’s e-commerce market, developing huge businesses by taking advantage of demand for services that allow most of China’s 1.3 billion people to buy goods online and have them quickly delivered. Such services have developed far faster in China than more mature Western markets due to the country’s recent adoption of a consumption-based economic model, which means it has relatively few established retailers.