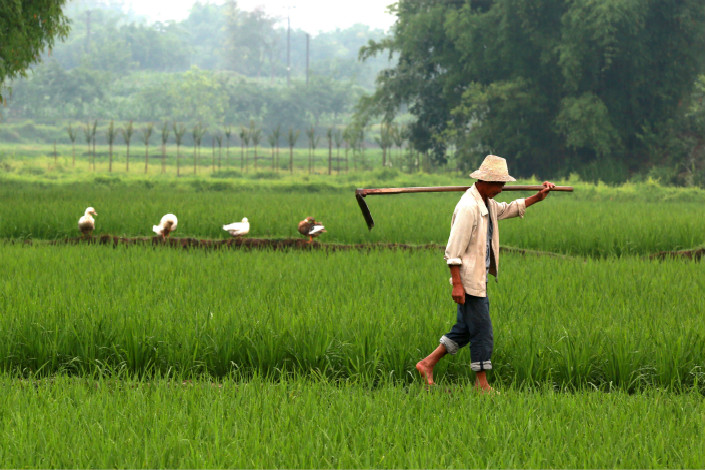 A farmer walks across a field in Sichuan province's Lu county in May 2015. The county government has broken new ground by capping the amount of land available free-of-charge to villagers for home construction. Photo: VCG

Last year, Xiong Guoqing sold his abandoned adobe house to the local village government for around 53,000 yuan ($8,263) and later bought an apartment in a nearby residential compound for little over 130,000 yuan.

That allowed the government to demolish his house in Lu county, in the southwestern province of Sichuan, and either reassign the land to a large-scale agribusiness or a property development project.

Xiong’s family of five are registered as local villagers, but they’ve been studying or working in the southern city of Guangzhou for years and rarely return to their village home. They are among the thousands of households that have participated in a government land reform pilot program launched in March 2015 in 15 rural counties.

In Lu county, villagers can sell their vacant houses to the county government via village committees, which oversee China’s collectively-held rural land. The government can then tear down the homes and turn the land over to other villagers for home construction, convert the plot into farmland or sell it to developers.

Village committees in Lu county have also for the first time introduced a cap on the amount of land villagers can acquire to build a home, a major break from the decades-old tradition of virtually unlimited access to “cost-free land” for home construction in the countryside.

Farmers in Lu county have welcomed the trial program, but academics warned that local governments, which take the lion’s share of profits from property transactions, shouldn’t turn such programs into cash cows. They also highlighted the potential financial risks associated with a slower economy, which drives down demand for land.

The program caps the amount of land available free-of-charge to villagers to build residences at 50 square meters (164 square feet) per head. Villagers are given a one-off cash reward of 100 yuan ($15) per square meter for any unused land within this quota. If they want more land beyond what’s allocated, they must pay 5 yuan per square meter each year and can access up to up to 50 square meters of additional land in this way. Higher annual fees apply to any extra land above the 100 square meter threshold.

The experiment comes as rural residents have been migrating in droves into cities for work, leaving their homes empty for years or even decades.

More than half of Lu county’s adults of working age had left for work in 2015, up from 37% three years prior, county government statistics show.

Rural land is divided into three categories — farmland, land allocated for villagers to build homes and land for commercial development.

While the central government maintains a tight grip on the amount of land designated as farmland, land for business development including the commercial property development required for urbanization is in short supply. At the same time, a rising number of homes are being left vacant by city-bound villagers.

Farmers in Lu county had 16,100 hectares (39,784 acres) of land on which to build homes by the end of 2016, or 170 square meters per person, county government data shows. About 30% of rural families in the county also had more than one home. Meanwhile, 27,500 of rural households, around 10% of the total, have left their homes empty for years, according to government statistics.

Xiong Guoqing built his 172-square-meter adobe house in Yuchan village in 1987. But the house was left uninhabited for years because his family lives and works in Guangzhou.

Nearly 3,000 families in Lu county chose to sell their homes to the government by the end of last year in return for compensation, calculated based on the value of the house and the land. This has enabled authorities to free up 383 acres which can be used for farming or commercial development.

A small portion of the sold land was used to develop a new housing complex for low-income families who had opted for an apartment over farm houses and the rest has been auctioned off.

Liu Shouying, a professor of economics at Beijing’s Renmin University and a prominent researcher on land issues, said the pilot program in Lu county has helped address legal loopholes pertaining to how land is allocated for rural housing because villagers have for decades gotten accustomed to free land. Such programs could also help revive rural areas in China, which have fallen into decay in recent decades.

However, the sustainability of such programs remains a challenge “because of risks from downward pressure on the economy, which will certainly dampen demand for land,” Liu said.

The government also needs to justify why it is entitled to take the lion’s share of profits from selling the land which seems unfair to villagers, he said.

Liu said that the government should eventually create a more “market-oriented system” to dispose of idle homes in rural areas so that residents rights are better protected.

Liu’s suggestion is also echoed by Cai Jiming, a Tsinghua University professor of economics, who said “the market should be allowed to play a role in such land transactions” so that villagers get a better deal.

What this means is eventually allowing villagers to sell their land, but, under China’s current rural land contracting laws, land is collectively owned by a village committee on behalf of all villagers. Rural residents only have the right to use land for agriculture or to build a house, but have no rights to negotiate with a third-party sell their land.