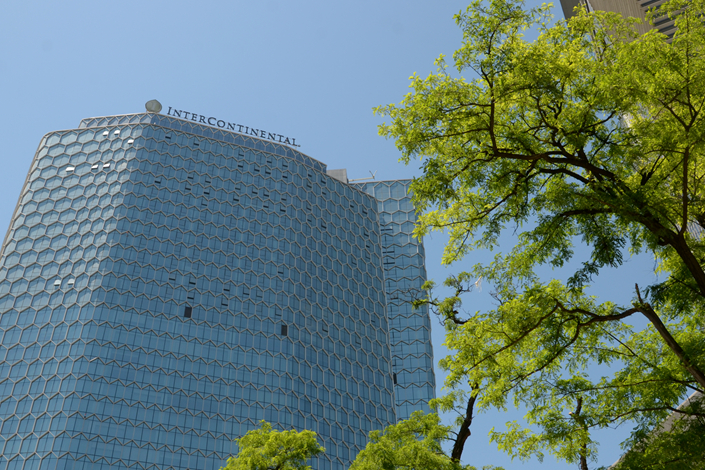 An Intercontinental hotel at Beijing's Sanlitun area in 2017. InterContinental currently has about 300 hotels under its various brands operating in China. Photo: VCG

Many foreign retail brands originally came to China as self-operators for stores and hotels that might otherwise use a franchise model in more mature Western markets, mostly due to lack of experienced local partners. But as the market matures, a growing number like InterContinental and McDonald’s are turning to a franchising model that allows them to expand more quickly and focus on brand development rather than individual store operations.

InterContinental has reached agreements to franchise about 100 Holiday Inn Express hotels on the Chinese mainland, following the company’s decision to begin franchising in the market late last year, CEO Keith Barr told Caixin on the sidelines of the World Economic Forum happening this week in Davos, Switzerland. Holiday Inn Express is the lower-cost brand from the Holiday Inn family, followed by the original Holiday Inn brand and the more upscale Crowne Plaza.

Following the rollout of the Holiday Inn Express franchising program, InterContinental is expanding the campaign to also include the Holiday Inn and Crowne Plaza chains, Barr said. Its historic Lido hotel in Beijing — one of the earliest foreign-managed hotels in China — is set to become one of the first from that effort, he added.

“We’re now moving away from fully managing our hotels to franchising our hotels,” he told Caixin. “We think the capability in China has reached a point where there’s enough local talent who have a desire and we have confidence to begin running hotels as a franchise, not as a manager.”

He added that InterContinental’s own Holiday Inn Express hotels in China are now 100% staffed by local Chinese, while Holiday Inns are also close to 100%. The company’s higher-end Crowne Plaza and namesake InterContinental hotels are about 95% locally staffed. Such local staffing will be especially important as companies like InterContinental move into smaller Chinese cities, where employing expatriate staff is often too expensive.

Separately, Barr said InterContinental is also moving ahead quickly with plans for a new China-specific hotel chain called Hualuxe announced last spring. Since that announcement the company has opened six Hualuxe hotels, which draw on traditional Chinese elements in a more contemporary setting.

“It’s the first brand designed for China,” Barr said. “I’d love to see us take that international at some point. I’d love to get some more in China, then to places like New York, San Francisco and London.”

InterContinental currently has about 300 hotels under its various brands operating in China. It competes in the market with other major foreign operators including U.S. giant Marriott International Inc. and France’s Accor SA, as well as an up-and-coming group of homegrown players including China Lodging and Jin Jiang. Another of homegrown player, GreenTree Hotel Management Group, Inc., is planning a New York IPO in the first half of this year, a knowledgeable source previously told Caixin.