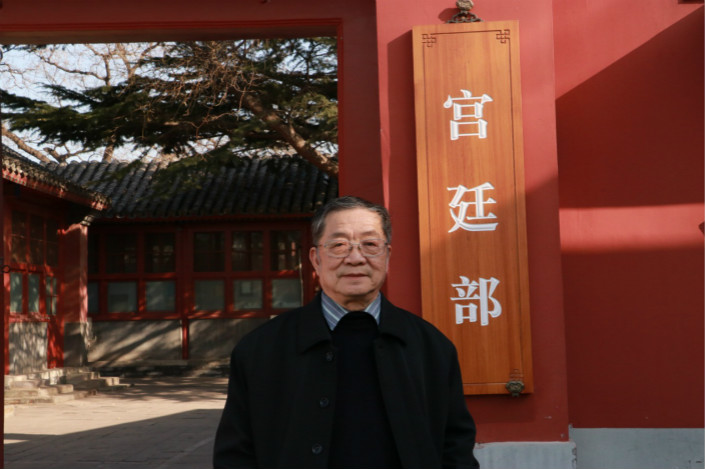 Liang Jinsheng, 70, stands at the entrance to the Palace-Study Department of the Forbidden City, where he has worked for nearly four decades, cataloging the 1.8 million relics in the palace compound. Photo: Wei Xiding/Caixin

After putting down a face-sized magnifying glass used to read tiny notes, 70-year-old Liang Jinsheng started typing with the index finger of his right hand.

The main keeper of relic catalogs at the Forbidden City was checking a list of antiques stolen by China’s last emperor, Pu Yi, before he was expelled from the palace in 1924.

Of the 1,165 relics taken away from the palace, only 235 have been returned. The others are scattered in collections in Nanjing and Taipei, or have ended up in foreign museums or private collections.

“I have finished counting and recording them, but I want to check them again,” he said while circling the names of returned relics with a red pencil.

This is only one of the problems that need to be resolved in the cataloging system used in China’s biggest museum, which has more than 1.8 million relics. That’s why Liang is still working — a decade after he officially retired.

Another reason he doesn’t want to leave his small office, stacked with piles of yellowing old records, is because five generations of his family has worked at the palace. His great-great-grandfather was the first to enter royal service, as a painter for China’s seventh Qing emperor, Xianfeng, who ruled from 1850-61. Eighty-one of the great-great-grandfather’s works are still stored or exhibited in the Forbidden City. Liang’s great-grandfather, Liang Shien, also a royal painter, has seven paintings stored there. Liang’s father and grandfather cataloged manuscripts and thousands of books in the royal library after the palace was turned into a museum in 1925.

Liang joined the Palace Museum in 1979, after working on a farm and teaching in the rural Inner Mongolia autonomous region during the tumultuous decade of the Cultural Revolution (1966-76).

He started off as a construction worker, and five years later, was tasked with identifying and cataloging relics. While combing through dusty crates in the museum’s warehouses by day, Liang went to night school at Beijing Normal University and got a degree in philosophy after he turned 40.

His biggest achievement to date is helping create a digital database of all 1.8 million artifacts at the museum.

“At first, I was reluctant to help create a digital database because I wasn’t good with computers,” he said.

Although he was instrumental in helping the Chinese Academy of Sciences design the system, Liang didn’t learn to type Chinese characters on a computer until he was in his 50s. Armed with a dictionary from the 1960s, he would look up the Latin-alphabet spellings for each character, and then type it with only one finger. It takes him several seconds to find letters on the keyboard. That’s how he typed a 100,000-word document highlighting discrepancies in catalogs in different museum warehouses — work that was crucial to make the database consistent and accurate. This process, which started in 2004, took nearly seven years.

“I don’t think it’s too slow,” he grinned. “There’s no rush. I will finish my work little by little.”

Before the digitization process, museum authorities struggled to track whether items were being exhibited, kept in storage or sent to other museums for display.

Their job was further complicated by the fact that some objects had multiple labels, based on different classification systems used by the museum before and after the founding of the People’s Republic of China in 1949.

Some precious relics were also labeled differently when they were spirited away as Japanese forces advanced toward Beijing during the Second Sino-Japanese War. First, the items were taken to Shanghai, and in 1937, the Nanjing Branch of the Palace Museum was opened. But when Nanjing was on the verge of being attacked, some items were moved southwest to Sichuan.

Nearly 3,000 boxes were taken to Taipei in 1948 and 1949 during the Chinese Civil War. As the guardians of these relics, Liang Jinsheng’s grandparents, two uncles and his eldest brother went to Taiwan. They never returned to the mainland.

Only some of the relics that were taken away for safekeeping were returned to Beijing from 1960 to 1963. Over 2,200 boxes with over 100,000 relics are also still in Nanjing after plans to bring them back to Beijing were thwarted by the Cultural Revolution. The Nanjing Museum has since refused repeated requests by the Beijing Palace Museum for their return.

Liang dreams of creating a complete record of all relics in Nanjing and Taipei and to exhibit them together one day.

He is also among a handful of experts who can understand the different, complex classification systems for the relics. The different labels for an object tell their story through time, Liang said.

His colleagues and even archaeologists and history professors knock on his office door and send emails to ask questions about different items.

“We call him ‘the walking encyclopedia’ at the Palace Museum,” said one colleague who has worked with Liang for nearly four decades. “I really hope he can get an assistant to help with his typing.”

Liang is now working on collecting documents and writing an index that allows experts to cross-reference one object through multiple classification systems.

Caixin spoke to Liang about the challenges of preserving Palace Museum artifacts, tracing their history, hunting for lost ones and ensuring that nothing is lost or stolen in one of the biggest antique collections in the world. Following are edited excerpts of the Chinese interview

Caixin: You’ve been cataloging Palace Museum artifacts for nearly four decades. What made you stick to the same job so long?

Liang Jinsheng: When compiling lists of labels and classifying relics, I feel like I’m having a dialogue with history. No one has ever done this job before me. It’s my sole responsibility to count items and collate information, which is quite complicated. The documents that I have compiled make it easier for young employees to cross-reference items using different historical classification systems (and trace the history of objects).

I’ve also helped introduce rules on how long relics should be exhibited and then left to rest in storage, which is crucial to preserving them. I advocated for such rules after seeing the color fade off some silk fabrics due to long-term exposure to sunlight while on display. These were lent by the Palace Museum for an exhibition at the Eastern Qing Tombs (a historical site in Tangshan, Hebei province). In 2005, the proposal to allow relics to lie dormant was finally included in the “Regulations for Cultural Relic Conservation and Protection” at the Palace Museum. For example, the detailed rules stipulate that paintings from periods prior to the Song Dynasty (960-1279) can be displayed for only up to two months at a time, and then they should be able to remain in storage for at least five years.

In recent years, China has tried to buy back its relics from foreign museums or private collections. What are the challenges encountered during this process?

Limited funds is one problem. In past years, there was a strict annual budget limit for repurchasing relics imposed by the State Bureau of Cultural Relics. Now there is another way to secure funds, which is by sending a report about a relic and applying for funds from the bureau. Many people donated cultural relics to the Palace Museum in the 1980s, but as the auction industry develops, people rarely donate relics to us now. Many artifacts are overvalued by auctioneers, in my opinion.

I don’t think it is worth purchasing relics from foreign countries, paying a huge sum of money. As long as these relics are still labeled as coming from China when they are displayed abroad, it isn’t necessary to buy them back first and send them out again for international exhibitions.

Is the digital database for relics at the Palace Museum complete? Is there anything missing?

The structure of the database has been established and all the key information about relics have been entered, including their serial numbers, labels in the past, the author, the time of the creation, etc. But detailed information that shows how the object changed hands over time hasn’t been added. For example, details such as how many seals are there on a painting since Chinese emperors used to affix their seals onto artworks, or whether a piece of art was stolen and then returned to the museum, are missing. These are also important to show the history of a relic.

How does an ancient artifact help us understand Chinese culture?

There is a lot of cultural information encapsulated within an antique. A painting can demonstrate the living environment of the painter, his living conditions, his habits and his way of viewing the world. A piece of porcelain can tell people about the craft techniques from a certain period.

Do you think that relics being exhibited in Beijing, Nanjing, and Taipei could be reunited one day?

I hope Nanjing Museum can at least acknowledge that the Palace Museum in Beijing still owns the cultural relics that were taken there for safekeeping. I also hope that it can make an inventory of all items in the original boxes and share this with Beijing so that we can make a comparison with our records from before the relics were moved south.

We need to collect this data to calculate how many relics are scattered among Beijing, Nanjing, and Taipei. (Taipei has shared information about its collection with Beijing.)

Another option is to unite different components of a cultural relic together in one place, irrespective of who owns them now. For example, some ornate alters for keeping Buddhist statues and offerings are at the Palace Museum in Beijing, while the sutra tablets are in Nanjing. In this case, the tablet should be returned to the Palace Museum because it means nothing without being placed on the relevant alter, and vice versa.

As for cultural relics taken to Taipei, I hope both museums can share the artifacts and exhibit them together in future. I have coined a phrase for the future of the two museums — “One Museum, Two Branches” — which means the relics all belong to the Chinese people, but can be displayed in two museums.

I hope he can continue to work here, but now he is working as a tour guide. Besides, there has been a regulation since the 1980s that no relatives of employees can work at the Palace Museum because once there was case when seven or eight people who were related were working here at the same time.