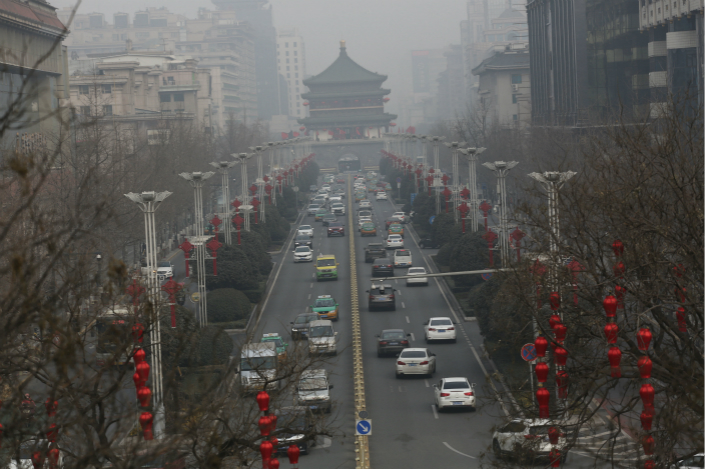 Li Sen, who headed the air quality monitoring unit in Chang’an district in Xi’an, stuffed air sampling devices with cotton padding 12 times between Feb. 5 and March 6, 2016, according to trial documents made public via China Judgments Online, an archive affiliated with the Supreme People’s Court. Under Li’s instructions, three of his subordinates had carried out similar violations on 12 other occasions in the one-month period, the documents show.

They were following order from He Limin, director of the Chang’an District Environmental Protection Bureau, “to do whatever it takes to push down pollution readings,” Li admitted during the trial.

The case is among a string of scandals uncovered in recent years in which Chinese environmental protection officials were found to have fudged air quality data to improve their own performance appraisals. District officials in Xi’an had tampered with air sampling devices to get pollution readings down as bouts of smog choked the city during the winter heating season in recent years.

Li, He and three of Li’s subordinates were among seven people who were sentenced to 15 to 22 months in prison for “destroying computer data” in June. Few details were made public about their violations in the past.

In a separate case, Tang Shixing, chief of the Environmental Protection Bureau in Yanliang district, also in Xi’an, was sentenced to 17 months behind bars for using cotton balls to alter air pollution readings at one site in early 2016. Zhang Feng, who was in charge of air quality monitoring stations in the district, was imprisoned for 19 months for his role in the scandal.

The sites in Chang’an and the one in Yangliang are among over 1,300 such facilities nationwide under the direct control of the Ministry of Environmental Protection. Ministry officials identified the fraud after seeing abnormal pollution levels from their headquarters in Beijing.

The site in Yanliang showed a very low reading for PM2.5 particulate matter ‑— about 15 micrograms per cubic meter (11.5 micgrams per cubic yard) of air — at 1 p.m. on Feb. 24, 2016, while readings at other sites in the same district at the same time were more than four times higher, according to a ministry document cited in the court papers.

Zhang had driven to the site in Yanliang district around 3 p.m. on Feb. 22, 2016, and taken two sampling devices to a “blind spot,” which were not under surveillance by CCTV cameras, before he stuffed the devices with cotton balls that were 3 centimeters (1.2 inches) wide, he told the court.

Li, who was in charge of air quality monitoring in Chang’an district, said that He had put him under a lot of pressure “to do something” about excessive levels of air pollution in April 2015. “I sent him a photo of a sampling device and explained to him how to tamper with it,” Li said during his trial. “He Limin gave tacit consent to this.”

Investigators retrieved 10 face masks made of cotton padding, including five that were cut into pieces, from Li’s office, which forced him to confess to using cotton padding to alter air quality readings.

In one occasion, Li summoned one employee to his office and gave him some cotton padding after he noticed high levels of PM10, another major pollutant, on the morning of March 6 the same year, according to court documents.