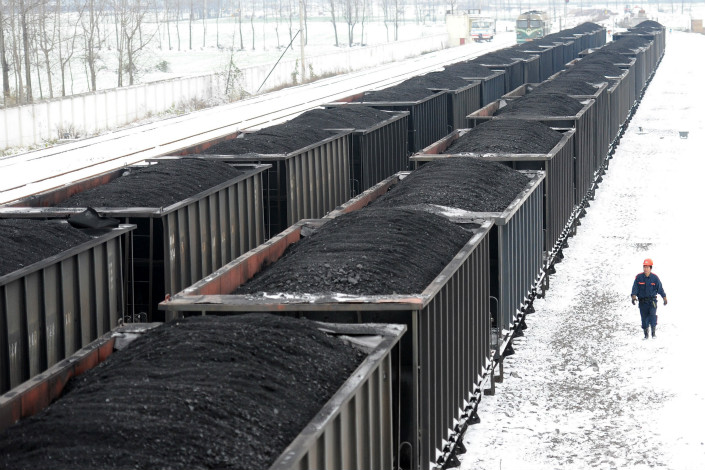 Freight prices have long followed a benchmark price set by the NDRC, which allows for a certain percentage of fluctuation. Last month, the NDRC began allowing rail operators to raise prices by 15% from the benchmark — up from 10% before.

The joint statement said that logistics made up more than 50% of the total cost for cross-region coal purchases, and in the northeast — where China Railway Corp. (CRC) subsidiaries have raised prices in two provincial capitals, Harbin and Shenyang — most of their power plants have posted losses.

CRC is acting according to market demands, and is not responsible for the increased cost, a source from CRC told Caixin. In 2013, China began pushing CRC and its regional subsidiaries to become more market-oriented.

Beijing initiated a “coal to gas” campaign to tackle pollution, but cold weather and a shortage of cleaner natural gas led to increased coal demand.

The average 2017 price for coal rose 34% to 642 yuan ($101) per ton year-on-year, according to a figure published by China-based consultancy Fenwei Nengyuan.

Last year, China partially banned diesel-powered coal trucks in the region around Beijing, Tianjin and Hebei province. This, combined with rising demand for coal, helped push up the demand for freight in 2017. NDRC figures showed that coal transport by rail rose 15.1% to 1.97 billion metric tons (2.17 billion tons) for the period from January to November.

The tension between the rail sector and power companies is unlikely to go away, as the 2017 truck ban is expected to continue to stoke demand for rail shipments.

Sources from the National Railway Administration told Caixin that market-oriented reform in the railway sector will continue and that CRC, not NDRC, usually has a final say on the specific pricing of coal transportation.