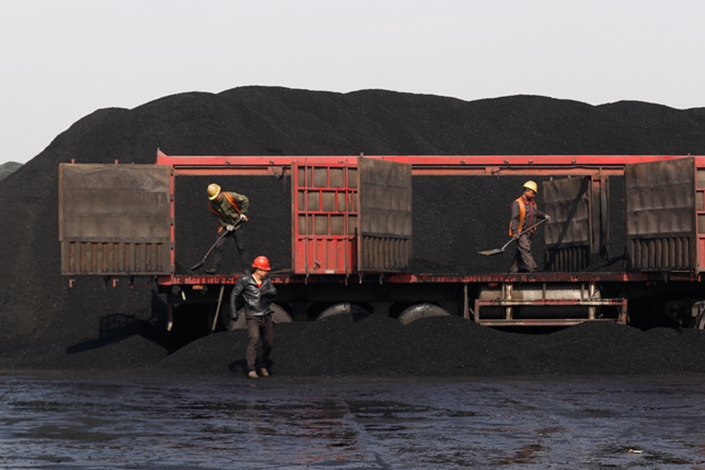 Workers move coal to a transport vehicle in Tianjin on Wednesday. Tianjin has banned polluting diesel-powered coal trucks from its port three months ahead of schedule. Photo: Xia Weicong/Caixin

(Beijing) — Tianjin has intensified its war on smog by banning polluting diesel-powered coal trucks from its port three months ahead of schedule, Caixin has learned.

Under the move, all coal handled by the port will be transported by railway instead of diesel trucks beginning at the end of April. The city had originally agreed to apply the ban in July.

The ban is part of a plan proposed in March by China’s Ministry of Environmental Protection, which contained radical measures to tackle air pollution, such as reducing targeted cities’ steel output by 50% in winter and setting up coal-free districts. All ports in Hebei province, which borders Tianjin, are required to ban diesel-powered coal trucks by September.

Tianjin’s Environmental Protection Bureau announced in a conference late Tuesday night that it would move up the start date, following Tianjin Mayor Wang Dongfeng’s visit to the port, according to sources close to the matter.

“One of the reasons behind the decision could be Tianjin’s deteriorating air quality,” said a source close to the ministry. “From January to March, the city dropped eight places to 10th-worst in China’s air-quality rankings.”

As one of China's most heavily polluted areas, the Beijing-Tianjin-Hebei region has struggled to battle severe smog in recent years. The port of Tianjin, China’s second-largest by cargo volume, was ordered to stop handling all goods due to low visibility caused by smog. The delays cost importers 78 million yuan ($11.3 million), according to the minutes of a meeting Caixin acquired.

Banning coal-carrying diesel-powered trucks in the port is a costly step, which is designed to reduce emissions to improve air quality in many cities, most importantly in Beijing.

The trucks depart from northern China’s coal-producing Inner Mongolia region, running 500 to 900 km to the Port of Tianjin. From there, about 100 million metric tons of coal products are shipped each year to users in southern China for power generation.

Such trucks have become a major contributor to Beijing’s air pollution. Eight thousand trucks pass through the capital each day, and 7,000 of them are coal-carrying, according to a research report Caixin acquired in March.

A source close to the ministry said that “the huge emission created by those trucks can offset one of Beijing’s major anti-smog measures, which uses an ‘odd-even’ system to restrict car use every weekday based on the final digit of a car’s license plate.”

In 2016, Tianjin’s port handled a total of 110 million metric tons of coal, 51% of which was transported by trucks, port data showed.

The port authority said in February that it was applying for permission to build more railway lines for transporting coal. Local media reported that it was seeking cooperation with neighboring ports in Hebei province in coal transportation.

China Railway Corp. has supported Tianjin’s port by approving in February the use of nearly 3,000 trains to Taiyuan, Huhehaote, and other locations to meet the expected demand. The company said they would provide more trains in the future.