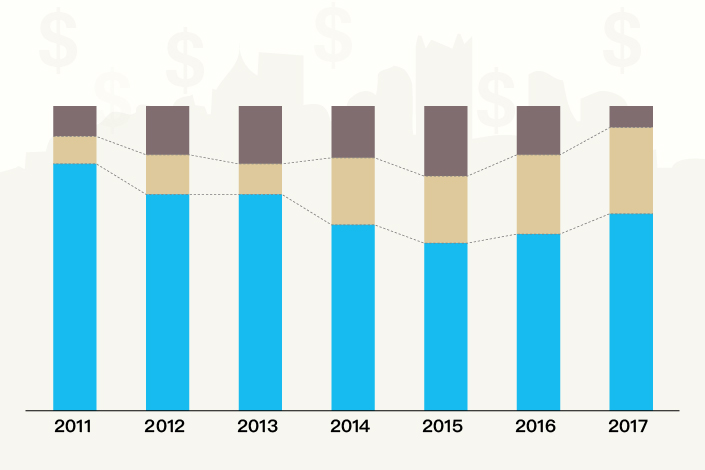 Sentiment among U.S. businesses in China rebounded last year as worries eased over potential for rising tensions under President Donald Trump, though concerns remained about rising labor costs and the regulatory environment, according to an annual survey by a major American business association.

At the same time, unspecified Chinese officials have told the American Chamber of Commerce in the People’s Republic of China that Beijing would retaliate if the U.S. takes punitive actions against China for unfair trade, AmCham Chairman William Zarit said.

Nearly all of the indicators in AmCham’s annual survey for 2017 showed improvement, following a slump in 2016 with the election of Trump, who had campaigned on getting tougher on China for unfair trade practices. In a follow-up to that pledge, Trump authorized an inquiry in August that could result in a formal probe into whether China engages in unfair trade policies in intellectual property.

But the broader tone during Trump’s first year in office was less severe than many had anticipated, with 84% of respondents saying the bilateral relationship had either improved or stayed the same in 2017, up sharply from 67% a year earlier. Within that figure, the number of respondents saying the relationship had improved more than doubled to 36% from 17% a year earlier.

Respondents were also encouraged by recent signals showing that China intends to further open many of its sectors to foreign investment, AmCham said.

“Following the publication of a State Council notice about encouraging foreign investment, most members have at least some confidence the investment environment will improve, particularly regarding facilitation of the entry and exit of foreign talent,” AmCham said in its report summarizing the results.

American companies in China reported rebounds in their business last year, and also predicted continuing growth for 2018. The survey found that 73% of companies were profitable or very profitable in 2017, up 5 percentage points from 2016, while 92% said their revenue was flat or growing, up 8 percentage points and markedly higher than a 2015 low of 77%.

U.S. businesses generally expect the Chinese economy to grow 6.3% this year, with more than half saying their industry will grow more than 5%.

“Regarding the economy, there is cautious optimism that the ‘new normal’ rate of growth is sustainable for the foreseeable future, providing opportunities for business to expand,” Zarit said. “It is still hard to realize outsized margins in China, but for many companies the outlook is generally positive. Nevertheless the survey continues to paint a troubling picture of the regulatory environment in China.”

He noted that frictions could rise if the U.S. takes moves that China considers protectionist, such as imposing punitive tariffs for unfair trade.

“We certainly don’t think a trade war would be helpful,” he said. “If indeed we have trade remedies, if that does go forward, I have been told by certain officials that, yes, definitely there will be retaliation. We’ll see what happens.”

But Zarit also noted a certain level of support among the American business community for a tougher stance on certain issues where they believe they are being treated unfairly.

“There’s a sense that strictly just dialogue has not really brought much in terms of progress. So perhaps some pressure will help get us more progress to a more balanced economic relationship,” he said. “The membership does understand there need to be some changes made here. To the extent that changes will be the result of some pressure, then that’s what will happen.”