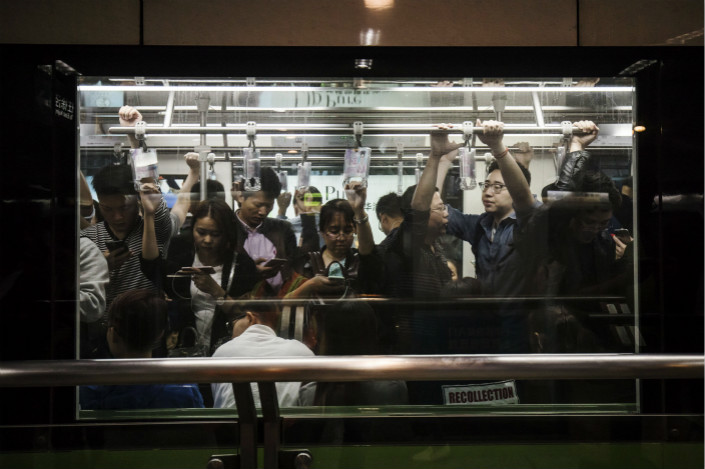 Chinese internet users made up 55.8% of China’s total population in 2017. Photo: VCG

China had 772 million internet users by the end of 2017, of which 97.5% used mobile phones to surf the web, according to a leading government think tank.

This amounts to 55.8% of China’s total population, with 40.74 million people getting access to the internet for the first time last year, according to a report released by the China Internet Network Information Center on Wednesday.

One feature of China’s internet landscape revealed in the report is the preference for mobile phones over personal computers, with increasing numbers of Chinese internet users using what’s in their pocket to access e-commerce, food delivery and payment services.

The increasing popularity of mobile technology has further boosted the e-commerce sector, with 506 million Chinese people using their phones to buy something from an online marketplace last year. The total sales of the sector — worth at least 7.18 trillion yuan ($1.2 trillion) — accounted for 15% of China’s retail sector.

“The integration between online and offline is deepening, as people are increasingly adept at the new way of shopping,” the report said.

Another area that has benefitted from increasing mobile internet use is the food delivery business. A total of 343 million internet users ordered something from a Chinese takeout app last year, a staggering 64.6% rise over the year before. The report said the sector has established a stable market as both delivery platforms and restaurants have begun to attach more importance to the business model.

The area of livestreaming has undergone strong development over the course of the year, as users in this area rose 22.6% to 422 million — 57.5% of all internet users. However, this area has faced regulatory challenges. As the report pointed out, a total of 18 mobile apps and 12 web-based platforms related to this area were shuttered in 2017.

The growing integration of cyberspace and the real world has also led to more and more people relying on the internet to get around. Although the shared-bike sector has grown increasingly saturated, firms still managed to wring more growth out of 2017, their total number of users reaching 221 million.

However, even though China’s internet penetration has seen significant development overall, there is still a stark urban-rural divide, with only 35.4% of rural residents using the web — less than half the proportion of urbanites.