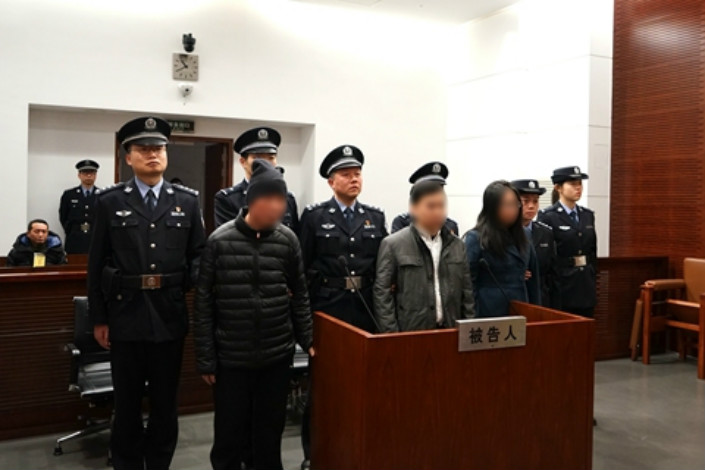 An automotive-parts maker has been convicted of fraud in connection with two private bond placements worth 100 million yuan ($15.9 million) in total in Shanghai, the first ruling of its kind in China’s financial capital.

The conviction highlights the growing financial risks stemming from loosely regulated issuances of high-yield bonds in the midst of a national crackdown on financial misconduct.

Zhong Heng Tong Machinery Manufacturing Co., a 10-year-old chassis-maker based in the eastern province of Fujian, inflated its revenue by 513 million yuan and its profit by 131 million yuan, paving the way for the company to issue of two private bonds on the Shanghai Stock Exchange in 2014, according to a verdict by Shanghai No.1 Intermediate People’s Court that was dated Wednesday.

The issuance based on the audit, which contained “severe misinterpretations,” enabled the company to raise 100 million yuan from the financial market. However, the company defaulted on both bonds, causing “major losses for investors” the court said, determining that the issuances were illegal.

The verdict didn’t disclose the names of the brokerage that underwrote the two bonds, nor the accounting firm that conducted the audit for Zhong Heng Tong Machinery.

Under current rules, private placements for bonds can be sold only to institutional investors and qualified individual investors. However, in some cases, they end up packaged in banks’ wealth management products, which then get sold to the masses with guaranteed returns.

Of Zhong Heng Tong Machinery’s two bonds, the company issued one with a relatively high coupon rate of 10.5% on Aug. 6, 2014, and another with a coupon rate of 9.5% on Nov. 11, 2014, according to Shanghai Stock Exchange. The bonds, which both had maturities of two years, were sold to two commercial banks and to an individual investor surnamed Che. It remains unclear how many individual investors ended up owning the bonds.

In November, a court in China’s southwestern province of Guizhou handed down the first ruling in the country (link in Chinese) on fraudulent bond issuances to textile company Xiamen Shengdawei Clothing.

The China Securities Regulatory Commission, the country’s top securities watchdog, said in a November statement that the legitimate ruling on fraudulent acts related to the private placement of bonds “is of great significance to deter criminal acts and to safeguard the healthy and stable development of the bond market.”