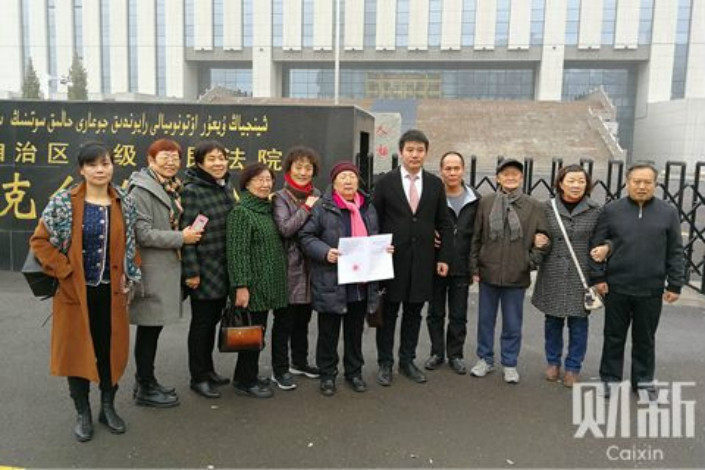 Zhou Yuan, fourth from the right, poses with relatives and his lawyer outside of the Xinjiang Uygur Autonomous Region High People’s Court shortly after he was exonerated on Nov. 30. Zhou has said the officials responsible for the miscarriage of justice should be held accountable. Photo: Wang Heyan/Caixin

A man in China’s northwestern region of Xinjiang, wrongfully convicted of molesting dozens of women and causing them grievous bodily harm, was awarded 1.9 million yuan ($301,796) in compensation on Monday, following his exoneration in late November.

Zhou Yuan, 47, said compensation alone wasn’t enough to remedy the loss of the personal liberty and mental trauma he suffered, and the officials responsible for the miscarriage of justice should be held accountable.

Zhou was freed from prison in 2012, but it took another five years for his name to be cleared. The Xinjiang Uygur Autonomous Region High People’s Court exonerated him of all charges on Nov. 30 after a retrial, because it was “difficult to rule out possibilities of a forced confession or a confession elicited via entrapment” in his case.

Zhou’s case is among a string of recent incidents where individuals have been exonerated after they’ve been executed or imprisoned for decades, because prosecutors used to rely on confessions made under duress instead of other evidence or witness testimonies.

However, the high court rejected Zhou’s demand for compensation linked to his five-day detention by police in the city of Yining before his formal arrest.

It was during these five days that he was subjected to different forms of torture in a basement at a police facility, according to Zhou. The pain was so unbearable that he confessed to sexually assaulting a student in a dormitory at the Yining No. 3 Middle School on May 16, 1997, he said.

He also admitted to 37 similar attacks targeting young women and school girls, dating back to 1991, although police had no other evidence — no testimonies from victims, no witnesses no fingerprints — to support claims made during the confession.

Such assaults continued to haunt the small town after Zhou’s arrest, until a year later when police caught another man named Huo Yong who confessed to the same crimes Zhou was found guilty of committing.

But, Huo’s trial, which resulted in him being executed in 1999, did little to influence the verdict in Zhou’s trials. He was given a suspended death sentence during his first trial in August 1998 and this verdict was upheld during a retrial at the same court, the date of which is unclear. A second retrial led to a life sentence in November 2000.

Zhou was freed from prison in 2012 after his sentence was commuted in late 2010, but his name wasn’t cleared, and Zhou’s mother Li Bizhen kept petitioning for his innocence.

An exclusive report by Caixin in 2014 on Zhou’s plight triggered a public outcry and several prominent lawyers came forward to offer legal aid to his family. Amid mounting public pressure, China’s top court, the Supreme People’s Court, ordered the regional high court to reopen the case at the end of 2016. Zhou was exonerated on Nov. 30.

In addition to the compensation, both Zhou and his mother said they want to see relevant officials held accountable for failing to follow due process.

“Right now, we’ve just been given some money that comes from taxpayers’ pockets including myself,” Li Bizhen said. “In a way, it’s like I am paying my son for another person’s fault.”