By Coco Feng and Bai Jinlei 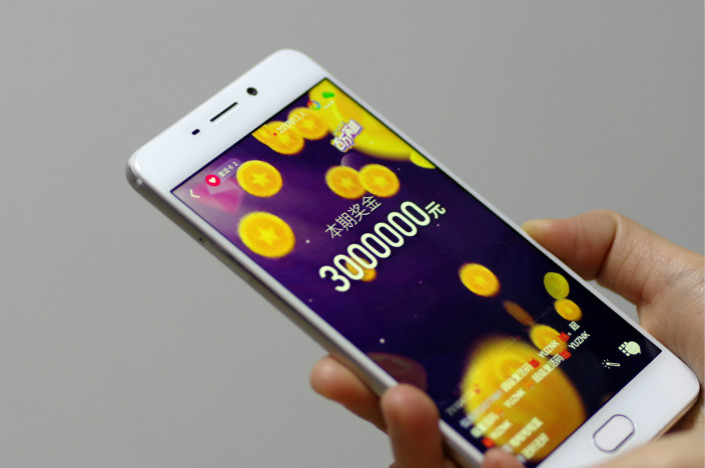 “Who is the real character behind the queen of spades card?” “Which flower appears on marriage certificates?” “Who was the first U.S. president to visit China?”

Eugene Zhang, a 27-year-old living in the northern city of Tianjin, immersed himself in these trivia questions for an entire Sunday. He is one of the tens of millions who have joined the “live trivia quiz app” mania that swept China in the first month of 2018.

There are a dozen such apps available in the country now, inspired by the original HQ Trivia app, which is based in New York. Players answer 12 multiple-choice questions in order to get a piece of a cash prize that can reach as much as hundreds of thousands of dollars. Those who get the questions correct within the 10-second limit move on, and the rest are eliminated until a final few remain.

After an entire day of answering questions, Zhang, who entered a quizzing session about once an hour, still had only an empty wallet for his efforts.

“Some of the questions were too tricky, and I didn’t have time to search or think during the 10-second time limit,” Zhang said.

But Zhang gloated when a session closed and showed that each winning player’s share of the cash prize amount to only 3 yuan (5 U.S. cents). “Did so many people get to the final rounds? Were they real players or computers?”

This craze for cash-for-questions quiz apps was first picked up by Chinese startups who copied HQ Trivia, the breakthrough app of this genre that was developed by the creators of defunct video platform Vine. It then attracted Chinese livestreaming platforms and big internet companies, including Baidu Inc. and NetEase Inc.

These trivial pursuits have given a boost to livestreaming platforms, who have seen their popularity stagnate over the last year due to a lack of creative content, which is limited largely to gaming, titillation and oddball performers.

Although these interactive smartphone games are seen by some professionals as a challenge to traditional television programs, the operators have yet to find a sustainable profitability model, and they face regulatory risks.

The first live trivia quiz in China was launched in December, but it wasn’t until the third day of 2018 that the game became a smash hit. On that day, Wang Sicong, the son of Wanda Group Chairman Wang Jianlin, endorsed a new trivia app, Chongding Dahui, in which he had invested.

The junior Wang, who has more than 25 million followers on the Twitter-like Sina Weibo, is a famous gaming entrepreneur and is well-connected to celebrities, many of whom also helped promote Chongding Dahui on Sina Weibo.

The next day, it was one of the top 10 most popular free apps on Apple’s China App Store.

Other similar apps soon followed suit, and some big companies, including Baidu and NetEase, inserted quizzes within their existing livestreaming or video platforms. More and more users have joined in the fun, with millions of people playing at once at peak weekend hours, and the prize money for some sessions reaching 1 million yuan ($155,000) or more.

These games are both entertaining and educational, while operators can easily achieve huge traffic with a small budget, so their popularity is unsurprising, said a person close to trivia app Zhishi Chaoren, or Cheese Superman.

Some apps have already attracted advertisers that pay to insert questions related to their products or services.

For example, group purchase and food delivery firm Meituan-Dianping sponsored a special session in which four of the 12 questions were related to its services. A total of 4 million people took that quiz.

These games have unexpectedly helped promote a voice-activated search engine launched by Baidu. Downloads of the search engine “surged” without any promotion after these trivia games went viral, a Baidu employee told Caixin. The 10-second time limit for answering the questions mean it is impractical to cheat using a traditional search engine that requires typing.

The audience of livestreaming apps, which grew to huge proportions in recent years, has started to shrink as users became bored with the limited range of content. Daily active users on these platforms decreased month-on-month from July to September, according to data firm Analysys.

Love for trivia games in China started to grow almost two decades ago, especially thanks to the popular weekly “Quiz Show,” broadcast by the state-run CCTV. The program debuted in 2000 and survived until 2013.

“Quiz Show” producer Liu Zheng commented that the latest trivia apps have “abruptly and explosively” taken these games from TV to livestreaming apps, and that if TV channels can’t think of a response, they will flop as newspapers did.

The team behind quiz app Chongding Dahui said that it wishes to reshape the future of TV content.

Amid the surging popularity, however, some industry professionals have stepped aside to look at the potential flaws and risks of the business model.

A person from one of the top video platforms said that they are not sure if the number of quiz participants is inflated, or whether operators dilute prize money.

Li Le, who is in charge of the trivia quiz of livestreaming platform YY Inc., said that if operators keep raising prize money to attract users, the industry will prosper for only a short time.

Some operators, under pressure to quickly crank out a lot of questions, have included content deemed inappropriate. Two weeks ago, one quiz operator, Huajiao, was ordered by the Beijing internet regulator to correct a question in which Hong Kong and Taiwan were categorized as countries.

After a few days of quizzing, Zhang said his interest has died down. “Each session starts at a specific time, but sometimes I am busy with other things. What’s more, the prize money is too small for me,” Zhang said.