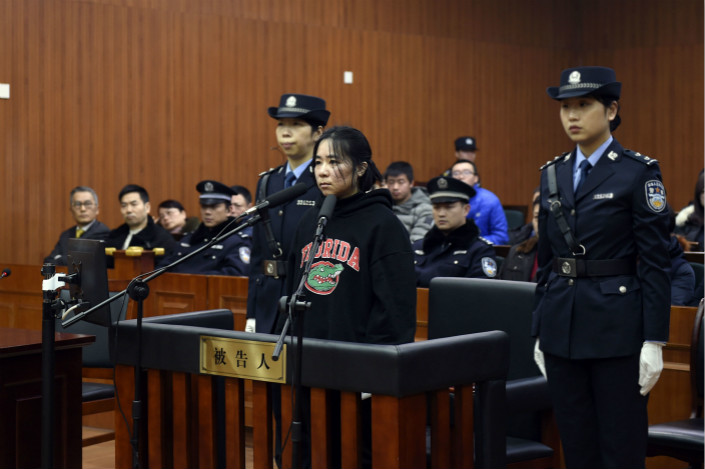 Mo Huanjing stands trial at Hangzhou Intermediate People's Court Thursday. The day before she started the fire, she stole a luxury watch from her employer, pawned it and lost all the money gambling. Photo: VCG

When Mo Huanjing deliberately lit a fire in her employer’s home, the domestic helper thought she could extinguish it quickly and get her boss to lend her more money out of gratitude.

But the blaze went out of control, killing her employer Zhu Xiaozhen and Zhu’s three children — two boys aged 10 and 4 and a 7-year-old girl.

The June 22 blaze inside a posh apartment in the wealthy eastern city of Hangzhou has been back in the limelight, as Mo’s trial resumed on Thursday.

The trial has been overshadowed by a row which broke out between her former lawyer Dang Linshan and the city prosecutor’s office over alleged reluctance by state attorneys to collect sufficient evidence from parties involved in rescue operations.

Sufficient testimony is crucial for a fair trial, especially because the family of the victims want Mo to be severely punished, Dang said.

“But justice isn’t served by simply putting the accused to death,” he said.

Mo, 35, is charged with theft and arson, which is punishable by death. The trial at the Hangzhou Intermediate People’s Court, in the capital of Zhejiang province, was adjourned in late December.

Dang said prosecutors only recorded statements from two of the 84 firefighters involved and neither of them was among the first batch to arrive at the scene. Dang has requested testimonies from 38 witnesses including several firefighters and more than a dozen guards employed by the property management company, but the request was rejected by the Hangzhou court, he told Caixin.

This has raised concerns among families of both Zhu and Mo on whether questions about possible negligence and delays by emergency response teams and the property management company will be answered.

After Dang walked out in protest during the previous trial, saying due process wasn’t being followed, the Hangzhou court appointed two lawyers to represent Mo on Thursday. Dang warned that Mo might be used as a scapegoat in the high-profile case to hide lapses by firefighters and building management.

In a statement issued through Mo’s former lawyer, her family said she should be held accountable for what she did. “But we hope her trial will be open and fair, taking into account all the facts and actions of other parties involved.”

Zhu’s husband, Lin Sheng, was seen crying throughout the hearing on Thursday and was escorted out of the courthouse when a testimony by a medical officers in an ambulance was read out, saying the younger son was still responding to electrocardiograph devices when he was being rushed to hospital.

Lin threw a thermos full of boiling water at Mo when she was brought to the dock to testify.

A Caixin investigation into the two-hour long rescue operation shows that although the ambulance arrived about 5 minutes after receiving Zhu’s call at 5.05 a.m. the victims were carried to the ambulance somewhere between 7.35 a.m. and 7.40 a.m. as firefighters were unable to reach the mother and three children trapped in the house.

What led to this delay? This question is key to understanding why emergency response teams failed in this case, and shows how similar tragedies can be prevented in a country prone to fire hazards.

The number of fires and associated losses and fatalities in 2016 dropped moderately from a year before, but China’s Ministry of Public Security said it recorded 312,000 fire incidents, 1,582 deaths and 3.7 billion yuan ($587 million) in losses in 2016.

Nanny with a secret

Zhu hired Mo in September 2016 through an agency for domestic helpers based in Shanghai. But Zhu had no way of knowing that Mo was an avid gambler who was fleeing loan sharks in her Guangdong province hometown after borrowing tens of thousands of yuan to fund her addiction, because such agencies don’t usually run background checks on maids, putting employers like Zhu at risk.

Zhu had already lent Mo 114,000 yuan before the fire, money Mo claimed she needed to help her family buy a house and cover other urgent expenses, according to a court document.

The day before she started the fire, Mo had stolen a luxury watch and pawned it for 37,500 yuan, police said. But she had squandered all the money betting online and only 0.85 yuan was found in her bank account, police said. After the gambling session, she has spent the next two hours searching for online posts using key words such as “minor implosion,” “fire on couch” and “setting fire to curtains,” her mobile phone logs retrieved by police shows.

Mo confessed to starting the fire by first lighting a book in the living room and throwing it behind a sofa covered with a cotton sheet next to a French window that extended from floor to ceiling.

Air coming in through the partially opened window fanned the flames and they spread to the curtain and filled the room with smoke, she told police. She said she even rushed into a bathroom to grab a bucket of water to extinguish the fire, but stopped in her tracks after Zhu told her to call the fire brigade first.

She was seen on a surveillance camera taking an elevator down from the 18th floor apartment at about 5:16 a.m. Police call center records show that she called 119, the emergency hotline for fire, at 5:10 a.m., but it’s unclear what happened to the family before she left them.

Zhu herself also called the police at 5:05 a.m. and the children’s cries can be heard in the background in a police audio recording accessed by Caixin. “My house is on fire, come quick! Come quick!” Zhu is heard screaming.

When reached by the ambulance dispatcher five minutes later, Zhu said she and the children were in a bedroom at the back of the apartment. That was the last time the rescue team heard from Zhu. It’s unclear why no one was able to contact her thereafter.

Zhu was found lying on the ground by a bed in a room connected to her living room by a narrow corridor at about 7 a.m. and her three children were lying next to her motionless, according to Zhu’s brother Zhu Qingfeng who was in the apartment at the time. “Their faces were blackened with smoke, but there were no burn marks found on their bodies, not even their hair was singed,” he said.

An autopsy attributed the four deaths to carbon monoxide poisoning.

Several fire engines arrived at the compound at 5:11 a.m., but were delayed because one of the two fire exits to the building was sealed off, according to Zhu’s family. The fire exit door functioned normally when a Caixin reporter visited the compound last month. But the road leading up to both doors had been turned into a lawn.

Firefighters said they had to break the door to get in before they could rush to the 18th floor and join two guards from the property management company who were onsite after being alerted by a smoke alarm.

Xu Ranli, the head guard, and his colleague Li Dong were hosing the apartment’s closed door with water, and they both said the firefighters “didn’t do much” at the beginning as they appeared to have forgotten to bring the tools needed to break open the front door which was locked from the inside.

The city’s firefighting department quickly dismissed the observation, saying firefighters at the scene were fully equipped and they had left all their tools on the 16 and 17th floor “pending further instructions.” They didn’t break open the door fearing fresh air from outside could intensify the flames and waited, while other firefighters tried to enter the house via the door to the maid’s room, separated from Zhu’s space by a glass door.

Analysts and Zhu’s family also questioned whether there was a breakdown in communication between firefighters, police, ambulance service, and building managers.

Zhu’s brother who had arrived by 6.10 a.m. was prevented by authorities from entering the building at first. When he forced his way upstairs at about 6.30 a.m. firefighters were still battling the flames and had told him they hadn’t seen anyone inside. He broke in and ventured in and saw his sister and the three children lying on the floor in a bedroom at the back of the house.

Zhu Qingfeng said he had to argue with firefighters for about 40 minutes before they agreed to carry the four victims downstairs. They said they were “waiting for instructions.”

Only one ambulance was available at the site when Zhu and her three children were brought down, and staff scrambled to schedule more vans.

The four were pronounced “dead at the scene” when they reached the hospital.

Hangzhou’s firefighting department didn’t respond to Caixin’s questions on whether firefighters had interviewed Mo for information on the whereabouts of victims trapped inside. Amid intense public scrutiny, Hangzhou Public Security and Fire Prevention Bureau launched an investigation into possible “irregularities” during the rescue operations earlier in January. But there’s no word on whether the investigation is ongoing or what its findings are.

“By all standards, we can’t define the rescue operation anywhere close to being successful because it wasn’t a big fire and firefighters failed to save any of the four victims,” Cao Gang, a firefighting specialist who worked for China’s paramilitary force said.

Zhu’s apartment complex, Blue Qianjiang developed by Greentown China Holdings Limited, was in an upmarket residential neighborhood in Hangzhou, fetching about 100,000 yuan per square meter on the market for used homes.

Zhu Xiaochen’s 300-square-meter (984 square feet) home overlooked the famous Qiantang River. This premium residential block was also among a handful in Hangzhou that was only required to carry out random fire safety checks, meaning only a few apartments were selected for a thorough fire safety inspection. The building Zhu lived in wasn’t on the list, a person with knowledge of the matter said.

“It’s difficult to say if Blue Qianjiang met government fire safety standards,” the source, who asked not to be named, said.

One sprinkler installed on the 17th floor, which firefighters tried to deploy to put out the fire through the maid’s room lost pressure halfway through, forcing them to switch to another on the 16th floor, according to an official statement. That apparently wasted precious time, according to analysts.

One former employee of the company which manages the property told Caixin that the company conducted an inspection of all smoke alarms and sprinklers in the wake of the deadly fire, replacing malfunctioning ones and rushing to fill fire safety inspection logs that had been left blank as it had failed to conduct routine inspections.

The developer, Greentown China, and the property management firm declined to be interviewed by Caixin.

Zhu’s husband Lin Shengbin issued an open letter earlier this week, renewing a request to access surveillance camera footage showing the firefighting operations. He also urged the authorities to make public findings from police and fire department investigations into the accident. He had filed a request for these documents under the country’s information disclosure regulation in late December.

Lin was away on a business trip at the time of the accident. He told Caixin that he saw a missed call from his wife when he woke up on June 22. The next thing he knew was that his family had perished.

“We’re living under a system that is so weak when it comes to responding to emergencies that our lives are fraught with danger,” he wrote in a social media post. “In retrospect, my family and our lawyer have all seen that it might have been possible to save my wife and children, but it didn’t happen in the end.”