The ‘Almost Impossible’ Crash of the Oil Tanker Sanchi 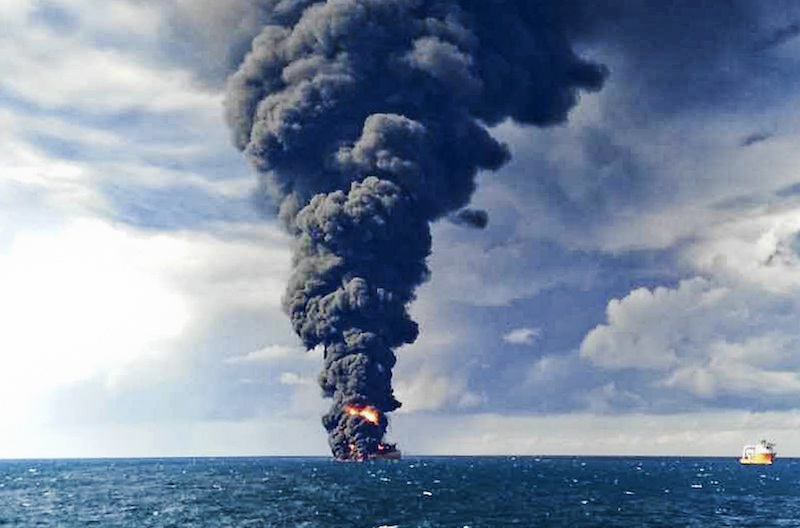 A toxic plume rises above the oil tanker Sanchi, pictured, which collided with a grain ship on Jan. 6 in the East China Sea. Photo: AP

It was a night Captain Zheng Lei recalls with horror.

Two huge cargo ships — one filled with oil — crashed into each other in the East China Sea near his small fishing boat on the windy and misty night of Jan. 6.

“There was a loud noise of the collision… and sparks caused by metal friction quickly ignited the ship,” Zheng recalled in an interview with Caixin.

One of the ships was the Sanchi, an Iranian-owned tanker that had a poor inspection record. It was carrying a highly flammable type of fuel oil known as condensate.

Only shortly before the crash, Zheng had sailed his boat passed the rear of the Sanchi, giving way to the huge oil tanker. The Panama-registered tanker and the Hong Kong-flagged freighter CF Crystal collided about 160 nautical miles (184 miles) off the coast of China near Shanghai and the mouth of Yangtze River Delta.

Zheng’s fishing boat was the first to the chaotic scene. He found the 21-member crew of the CF Crystal in a red life raft, terrified and desperate. But the fiery blasts of the Sanchi thwarted Zheng’s attempts at rescue: All 32 crew onboard of Sanchi, 30 Iranians and two Bangladeshi, are believed to have perished.

It is being called the worst oil-ship disaster in decades, with an as-yet incalculable impact on local marine life.

An investigation is underway.

But already the Sanchi accident may be rewriting the history books for oil cleanup and environmental impact. The world’s biggest oil-related maritime disasters have involved heavy crude, which accumulates in easy-to-see areas. Not so for Sanchi’s ultra-light oil, which is making control and cleanup challenging, and pushing questions about environmental impact into unchartered waters.

And the accident is prompting questions about whether China is ready to handle major maritime catastrophes — a question made all-the-more pressing as sea traffic grows and the country increasingly relies on shipped-in oil imports.

The Sanchi had departed from Iran's Assaluyeh port on Dec. 13 and was set to arrive at Daesan in South Korea on Jan. 6. The 274-meter ship carried 111,300 metric tons of condensate, an ultra light type of crude. CF Crystal, a 225-meter freighter en route from the U.S. to Guangdong, in southern China, was loaded with 64,000 tons of grain.

After the deadly collision, Sanchi drifted ablaze with a huge plume of black toxic smoke.

The Sanchi was burning fiercely, with constant blasts. The fire spread to the CF Crystal, whose head hit Sanchi on its right side. The CF Crystal circled the crash site and drifted after its crew fled with its power still on, according to eyewitnesses.

The Sanchi spilled its oil cargo for more than a week before sinking on Jan. 14.

Zheng Lei first noticed the Sanchi from his onboard global positioning and vessel tracking system at around 19:30 on Jan. 6, as he sailed southwest to the coast of Zhoushan — China’s biggest fishery hub — after a fishing mission. The system showed that the ship was sailing northward, and would cross the route of Zheng’s boat — Zhedaiyu 03187 — at some point.

There was a risk of collision if both remain their current route, Zheng said. He called Sanchi through his radio. “Sanchi，China small boat，Zero Nine Zero Starboard.” It was a request to Sanchi to adjust its route to avoid collision, Zheng said.

According the international maritime traffic rules, ships should give way to other vessels on their starboard side when conditions allow. But in practice, few huge ships change their routes for small fishing boats, several Chinese fishermen told Caixin.

The Sanchi was no different. The Sanchi responded, “We will keep our route,” Zheng said.

Zheng turned his boat left to give way to Sanchi. As he passed the ship’s rear, he noticed the tracking of another large vessel that was sailing a similar route to his, meaning it might hit the Sanchi in 20 minutes. “If neither of them change route or speed, they will definitely crash,” Zheng recalled thinking.

The accident seems incredible to many in the shipping world.

“It is so strange. With current technology, it is almost impossible for two ships of such size to crash,” said Fang Wuhai, a maritime affair official at Zhoushan, Zhejiang province. All large ships today are equipped with an advanced tracking system called AIS. The AIS system will issue an alert when any vessel appears within a certain distance that could pose a risk of collision, giving the crew time to respond, Fang said.

The AIS database showed that the Sanchi was last spotted almost 24 hours before the crash. Since then, the ship’s AIS system doesn’t appear to have submitted any information.

“It is possible there was a system fault on one ship. But two at the same time? And why didn’t their bridge watchkeepers see each other?” asked Fang.

Several shipping industry sources told Caixin that they think negligence was the main reason for the accident. “We can basically determine that the accident was caused by negligence of lookout,” one person said.

Data from Lloyd's Register Foundation (LRF) showed that the Sanchi was built in 2008 and operated by National Iranian Tanker Co., Iran’s top oil-shipping operator. Between 2015 and 2016, the ship was identified as a “high risk ship” by Port State Control (PSC) inspectors under the international ship-inspection regime, meaning its condition and management were poor. In its most recent inspection, the ship was listed as just below the high-risk line to alert port authorities for special attention.

Iran’s oil-shipping industry has long suffered from a capital shortage in vessel maintenance and crew training due to economic sanctions, a Chinese trader familiar with Iran’s shipping services told Caixin.

PSC records showed that the CF Crystal was named as a “high risk ship” once. In the latest inspection, the ship was assessed as low risk. The collision with Sanchi didn’t cause critical damage to CF Crystal, according to China’s Ministry of Transport. The CF Crystal docked in Zhoushan on Jan. 8.

A joint investigation into the accident has been launched by maritime authorities of the Chinese mainland, Hong Kong, Panama and Iran. On Jan. 13, the day before Sanchi sank in a final blast, a Chinese rescue team managed to board it and recover the black box containing the ship’s voyage data and voice records.

The black box has been opened and analysis began on Jan. 22, according to Iranian state media. It may take three months to decipher the information to help determine the cause of the tragedy, according to the report.

The accident may have caused one of the world’s worst oil spills, larger in size than oil spilled by the Prestige tanker, which sank off the coast of Spain in 2002. That accident, the worst in Europe’s history, damaged beaches in France, Spain and Portugal, and led to the closure of one of Spain's richest fishing areas.

The East China Sea is an important fisheries area for China, Japan and South Korea. Hundreds of species of commercially harvested fish live in these waters, as well as whales, seabirds and other marine life.

What makes the Sanchi accident unusual is the type of oil spilled. Unlike the heavier crude oil involved in most of the infamous spills of the past, the Sanchi carried condensate — a lighter, more volatile petroleum product that can burn off or evaporate quickly — leaving a different pollutant residue, according to an official at the State Oceanic Administration (SOA).

It is the first time that the condensate has been unleashed into the sea in such a large scale. Rescue teams are working against the clock to clean up the oil slicks. But unlike heavy crude, which accumulates in thick, shimmering slicks on the water’s surface, spills of condensate is less visible to monitor and contain. Water near Sanchi’s sinking site was covered by a thin layer of oil, mildly reflecting the sunlight just like the road surface after rain, said an expert who inspected the site.

Authorities have had trouble pinning down the size of the spill, a challenge made more difficult because of changes in the strong ocean currents, the SOA official said.

At a news briefing, the SOA said satellite images of the area spotted no large oil spill on Jan. 22. But only one day before, areas totaling 332 square kilometers were found to contain oil.

The size of the spill and its chemical makeup still remain unclear as the article went to press, making it difficult to evaluate the accident’s ecological consequences.

Huo Chuanlin, head of the SOA's Ecological Protection Department, told media on Jan. 19 that it is unclear how the pollutant residue left will affect marine life in the area and it will take long-term monitoring to figure it out.

Experts say the accident also rings the alarm for China to improve its capacity to deal with major maritime disasters, as the country increasingly relies on oil and gas imports from the sea.

According to China National Petroleum Corp.’s Research Institute of Economics and Technology, China’s net imports of crude oil rose 10.7% in 2017 from the previous year to 418 million tons. The figure is expected to rise to 450 million tons this year. Nearly 70% of the country’s oil consumption depends on imports.

But China’s maritime capacity for rescue and oil spill control hasn’t caught up with the pace of the growing traffic on the sea. The country established its first oil-spill emergency response system in 2000.

In 2016, the Ministry of Transport and other central government departments outlined a plan to expand the country’s capacity to be able to clean up 10,000 tons of oil on the sea. But the spill of Sanchi may have already exceeded that limit.