Sunken Oil Tanker Should Have Been 'Bombed' to Minimize Pollution, Experts Say 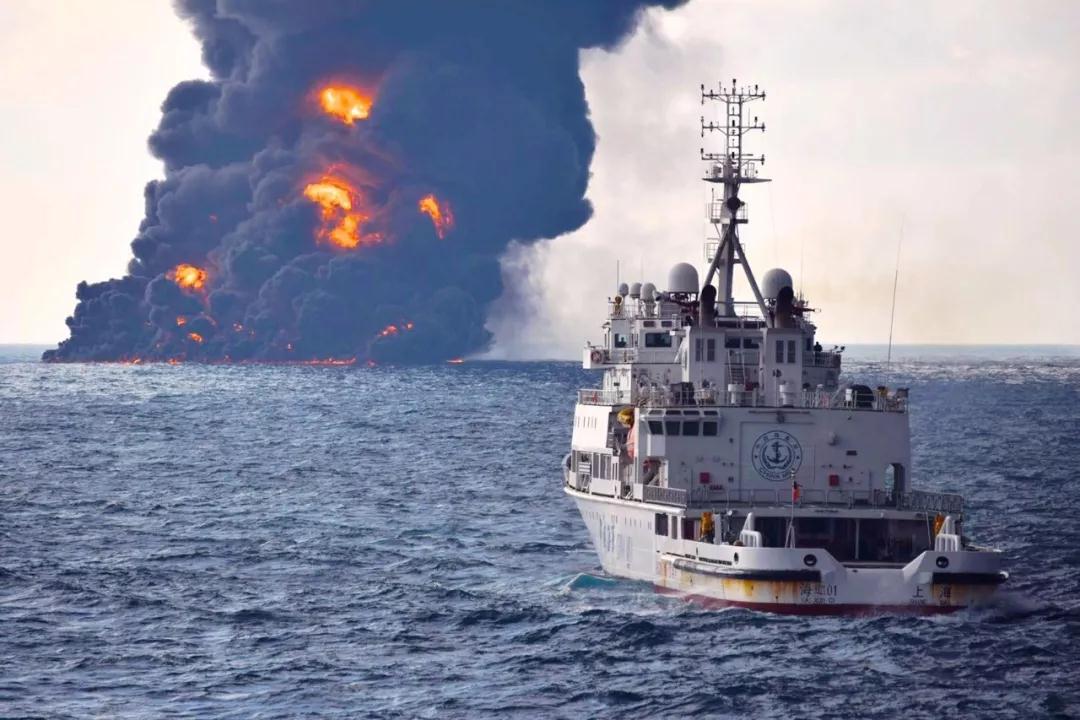 The Sanchi was shrouded in thick smoke following an explosion Sunday afternoon before it sank off China's east coast. Photo: Ministry of Transport

A Panama-flagged oil tanker, burning for more than a week after a collision off China’s east coast, sank Sunday, raising serious concerns over coastal pollution.

Some experts said the authorities should have bombed or torpedoed the vessel so that it would explode and its fuel would burn out, instead of letting it slowly seep into the ocean floor, thereby minimizing the environmental impact.

The burning ship sank around 3 p.m. local time Sunday, about 151 nautical miles southeast of where the accident occurred, according to China’s State Oceanic Administration.

The tanker tilted further to its right after an explosion around midday Sunday and flames as tall as 1,000 meters (3,280 feet) could be seen rising toward the sky at the time, according to China’s Ministry of Transport. The smoke was so thick that the Sanchi was “not visible” by about 1:45 p.m., the Ministry said.

The tanker was loaded with 136,000 metric tons (149,914 tons) of ultra-light oil known as condensate, according to ministry.

But condensate would quickly burn or evaporate and was less likely to leave a thick oil slick, but the 2,000 metric tons of fuel used to power the vessel would cause more pollution, according to Yu Zhirong, a former deputy of the East China Sea unit of China Marine Surveillance.

“I proposed bombing or torpedoing the vessel instead of letting it sink the same way the Japanese coast guard handled a vessel (named Yuyo Maru No.10) with liquefied natural gas off the Tokyo Bay which burnt out of control in November 1974,” Yu said.

Bombing the vessel so that it explodes completely, allowing all the fuel to burn out “is better than allowing it to sink with its fuel tanks full,” because the former option would limit pollution, he said.

Marine ecologist Chen Shang, with the China Society of Fisheries, said allowing the Sanchi to sink on its own was the “worst-case scenario,” because the ship’s fuel will slowly leak out at the bottom of the ocean, threatening marine life. It is also difficult to conduct clean-up operations after the ship has sunk, because the waters in which the Sanchi went down are about 100 meters deep, he said.

The Zhoushan Islands off China’s east coast, close to where the accident occurred, are home to many commercial fish farms. The islands are also the winter habitat for species such as the ribbon fish, which would be among the most affected, according to Li Jiansheng from the Chinese Academy of Fishery Sciences.

A four-member salvage team was able to board the Sanchi Saturday to retrieve its Voyage Data Recorder. Thirty Iranians and two Bangladeshis were on board the tanker. Only three bodies have been found so far, the ministry said.

The damaged Hong Kong cargo ship is anchored at the Zhoushan Islands. All of its 21 crewmembers were rescued and transferred to a fishing vessel.

The sinking of the Sanchi has brought relief to the authorities, who were worried that the tanker, which had been drifting southeastward, could threaten an oil rig operated by state-owned China National Offshore Oil Corporation off China’s east coast.