By Yang Ge and Shi Rong 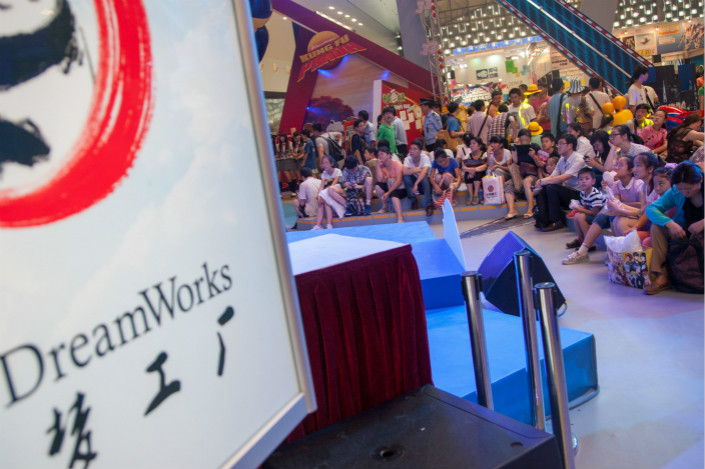 Young visitors to the Shanghai Pudong Expo in July 2013 sit near the Oriental Dreamworks Pavilion. The joint venture didn’t produce many major films. Its biggest production, “Kung Fu Panda 3” was the weakest in the three movies from that franchise, despite earning more than $500 million at the global box office. Photo: VCG

DreamWorks Animation LLC has sold off its China joint venture stake to local partner CMC Capital Partners, marking the end of a relationship that began with big hopes but ended with relatively little major output.

DreamWorks Animation’s sale of its stake in Oriental DreamWorks comes less than a year after the company exited another major undertaking also in China’s commercial hub of Shanghai, and less than two years after the company was acquired by the parent of U.S. entertainment giant NBCUniversal. It also comes as an earlier wave of tie-ups between Hollywood and China shows signs of starting to cool.

As part of the buyout, the animation joint venture between DreamWorks Animation and CMC Capital will be renamed Pearl Studio, the companies said in a joint announcement.

“As Oriental DreamWorks evolves and relaunches as Pearl Studio, we have successfully accomplished the goals we envisioned when we began building this business many years ago,” said CMC Chairman Li Ruigang. “We have a world-class creative and development team and a robust and exciting pipeline of projects we are committed to bringing to screens around the globe.”

The pair will continue to work together on the film “Everest,” which is currently in production and slated for release next year. Universal Pictures will distribute that movie outside China. At the same time, DreamWorks Animation’s own film, television, consumer products and digital gaming businesses will become part of NBCUniversal in China.

“We have tremendous respect for Li Ruigang and CMC, and look forward to many opportunities to work together as they continue to build this business as Pearl Studio,” said Jeff Shell, chairman of Universal Filmed Entertainment Group.

Oriental DreamWorks’ formation was announced with fanfare in 2012, kicking off a long stream of major tie-ups between Hollywood and Chinese partners keen to develop films that could appeal to moviegoers in a market that has become the world’s second largest. China currently limits the number of foreign movies that can be imported each year, and many of the tie-ups were designed to get around that quota by containing enough locally-produced content to be classified as domestic.

But the DreamWorks Animation venture didn’t produce many major films. Its biggest production, “Kung Fu Panda 3” was the weakest in the three movies from that franchise, despite earning more than $500 million at the global box office.

DreamWorks Animation’s exit from the venture also marks the second major step back for the company from China following its sale to NBCUniversal and the departure of former chief executive Jeffery Katzenberg, a big China booster. Last year, the company quietly exited DreamCenter, which was meant to be a multibillion-yuan entertainment-oriented business and cultural center in the downtown Shanghai area, according to previous media reports.

DreamWorks Animation’s exit also comes as a recent Chinese appetite for Hollywood assets has slowed abruptly, largely the result of Beijing’s attempts to slow down foreign exchange outflows and cut back on purchases it considers frivolous. Last November Huahua Media terminated a $1 billion film financing partnership with Paramount Pictures. Earlier in the year Wanda Group pulled out of a similar-sized deal to buy Dick Clark Productions.