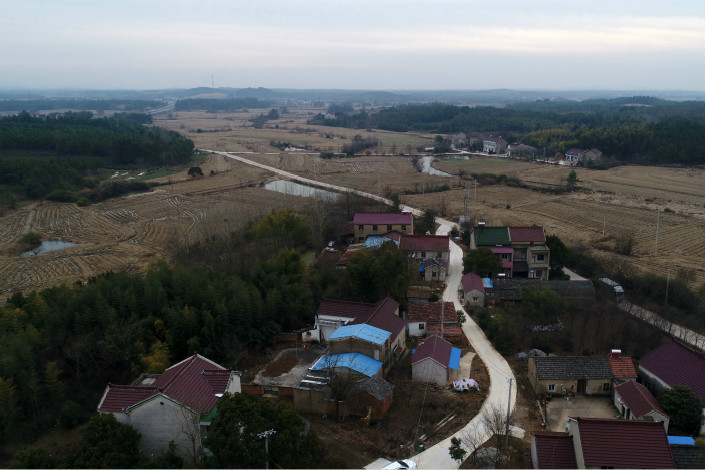 The government will “moderately relax” controls on rights for rural land allocated for villagers to build homes and houses left vacant by city-bound migrant workers, according to the government’s No. 1 document. Photo: IC

China will loosen controls on the use of land allotted to farmers for building homes, the central government said in a widely-watched document regarding rural work, as it seeks to free up more such land for development.

Under China’s current laws, rural land is collectively owned by a village committee on behalf of all villagers. Rural residents can only use the land for agriculture or homebuilding, but have no right to sell their land. The market is hoping reforms will allow rural land allocated to villagers for home construction to be sold to real estate developers to increase residential land supply. Such land can now only be traded between farmers in the same village.

The government will “moderately relax” controls on rights for rural land allocated for villagers to build homes and houses left vacant by city-bound migrant workers, according to the government’s No. 1 document (link in Chinese) of this year, which has traditionally focused on issues about farmers, the agricultural industry and rural areas.

The document, jointly issued Sunday by the State Council — China’s cabinet — and the Central Committee of the Communist Party, came after Land and Resources Minister Jiang Daming said last month that authorities will work on plans to let non-real estate companies build residential housing on land for which they have obtained use rights. The government will also allow rental housing on rural land to increase rental options, he added.

The state-run Xinhua News Agency said then that the reform will eventually open up more residential land to be supplied from sources other than the government, which is now the sole supplier. The No. 1 document said that the government will “improve policies on undeveloped rural land designated for residential construction and on vacant rural houses” as part of its efforts to reform the structure of land rights.

Han Jun, director of the Office of Central Rural Work Leading Group, said Monday that massive numbers of farmers move to cities every year, leaving lots of rural land designated for housing construction unused and numerous rural homes empty. That land and those houses, if left undeveloped or in disrepair, would be “a huge waste,” he said.

“But they could bring big fortunes if they get to be used,” he said at a news conference.

He cited a survey done by the government of Wuhan in Central China’s Hubei province showing that 15.8% of the 730,000 rural homes in the city were empty year-round in 2016. However, he reiterated that illegal trading of such land is still banned and it is strictly prohibited from being used for the construction of villas and private recreational clubs.