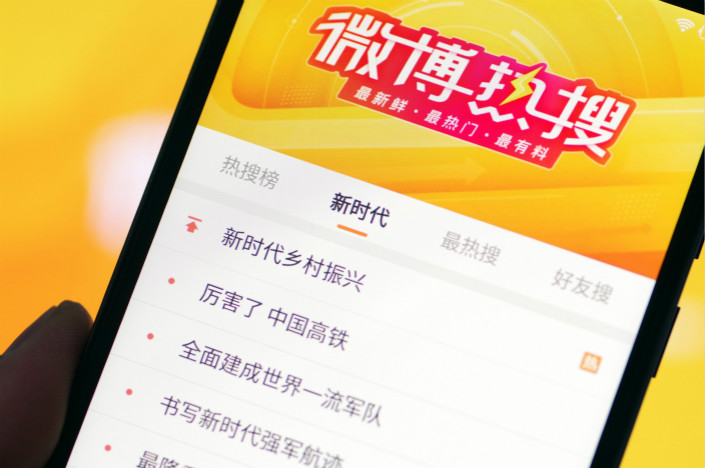 Weibo users are again able to access the web portal's "trending function," which lists the most popular search terms, one week after the Cyberspace Administration of China ordered Weibo to suspend it due to “obscene” and “wrongly oriented” content. Photo: VCG

Weibo Corp. has introduced a “New Era” section that promotes pro-government news stories into the web portal’s “trending” function — a move that follows government criticism of the search feature.

Beginning Saturday night, Weibo users were again able to access the trending function, which lists the most popular search terms. One week earlier, Weibo was ordered by the internet regulator, the Cyberspace Administration of China (CAC), to suspend it due to “obscene” and “wrongly oriented” content.

The “New Era” section — a reference to President Xi Jinping’s “Socialism with Chinese Characteristics for a New Era” slogan, unveiled at last year’s 19th National Party Congress — is now one of the four kinds of trending searches users can browse. The section includes searches about government policies and news about the country’s achievements.

Weibo is now one of several web portals that have added patriotic sections, including news aggregator Jinri Toutiao and news outlet Phoenix News, which last month were punished by the regulator for spreading “pornographic content” and providing news services without the necessary licenses.

The tightening internet environment is expected to pose challenges for Weibo, whose $26.8 billion market valuation has exceeded its Western microblogging rival, Twitter Inc., which was $19.2 billion on Friday. Weibo’s stock dropped by 6.6% on Friday, bringing its decline over the last week to almost 10%.

Weibo — which has made something of a comeback and transformed itself into a more-entertainment-oriented platform away from its beginnings in hard news — has a business model based on its vast cache of online celebrities, known as “big Vs” due to their “verified” status and large fan bases.

The trending list that was labeled “obscene” is supposed to represent the most frequent searches of the platform’s 360 million monthly active users, but many have alleged that the list is manipulated by celebrities or other digital companies.

Additionally, the CAC issued a new rule for microblogging providers on Friday. The rule, which will come into effect by next month, further emphasized platforms’ responsibility to censor users’ content.

“Microblogging service providers should establish a sound system in which users’ information, including what they have published, can be monitored,” the regulator said, adding that users’ data should be handed to the government.

In response, Weibo said it welcomed the new regulations, saying it has for years taken measures, including real-name registration, to create a healthy internet space.