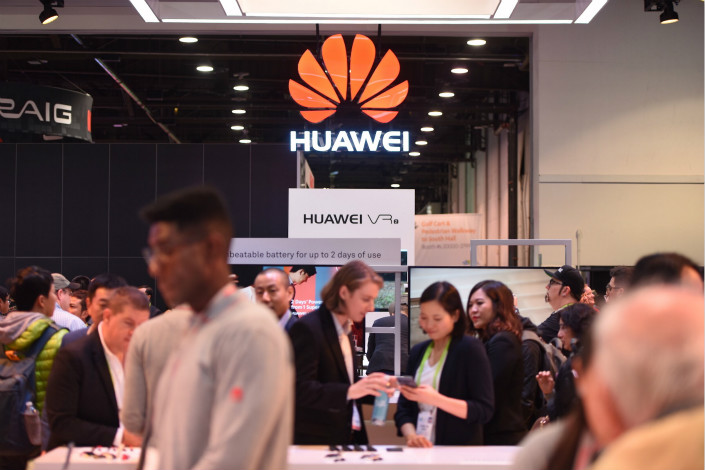 The Huawei booth at the 2018 CES technology trade show in Las Vegas. Huawei Technologies Co. Ltd. was founded in the 1990s by a former engineer from the People’s Liberation Army, leading some to speculate it has government ties — something the company has repeatedly denied. Photo: VCG

Two U.S. senators introduced legislation that could ban government agencies from buying telecoms equipment and services from Chinese manufacturers Huawei and ZTE, in the latest sign of a tougher stance from Washington in trade between the world’s two largest economies.

The legislation introduced by Republican Sens. Tom Cotton, from the U.S. state of Arkansas, and Marco Rubio, of Florida, on Wednesday would only apply to purchases by U.S. government agencies, according to a statement on Cotton’s Twitter account. It cited national security concerns as the main reason for the law.

Huawei Technologies Co. Ltd. was founded in the 1990s by a former engineer from the People’s Liberation Army, leading some to speculate it has government ties — something the company has repeatedly denied. ZTE Corp. is also a publicly-listed private company located in the southern boomtown of Shenzhen near the Chinese border with Hong Kong.

“Huawei is effectively an arm of the Chinese government, and it’s more than capable of stealing information from U.S. officials by hacking its devices,” said Cotton. “There are plenty of other companies that can meet our technology needs, and we shouldn't make it any easier for China to spy on us.”

Rubio added his view that Huawei and other Chinese telecoms companies “are directly linked to the Chinese government and Communist Party.” “For national security reasons, we cannot allow a foreign adversary to embed their technology in U.S. government systems or critical infrastructure,” he said.

Spokeswomen for Huawei and ZTE had no immediate comment.

The move follows the introduction of similar legislation last month in the U.S. House of Representatives. For the ban to become law, both chambers must ultimately pass identical legislation, which would then go to President Donald Trump for signing.

Trump’s administration has signaled it will take a tougher trade stance on China by vetoing several major cross-border deals involving purchases of U.S. companies by Chinese buyers. Most recently the regulator that reviews all such deals for national security concerns declined to approve the sale of money transfer specialist MoneyGram International to China’s Ant Financial for $1.2 billion.

U.S. lawmakers also reportedly pressured major local wireless carriers AT&T and Verizon to abandon plans to pursue deals to offer Huawei smartphones under subscription plans. Such tie-ups are important in the U.S., where three-quarters of people get their smartphones through their carriers. Despite that setback, Huawei has moved ahead with plans to sell its smartphones in the U.S. through traditional retailers like Amazon.com and Best Buy.