By Li Rongde and Yu Lu 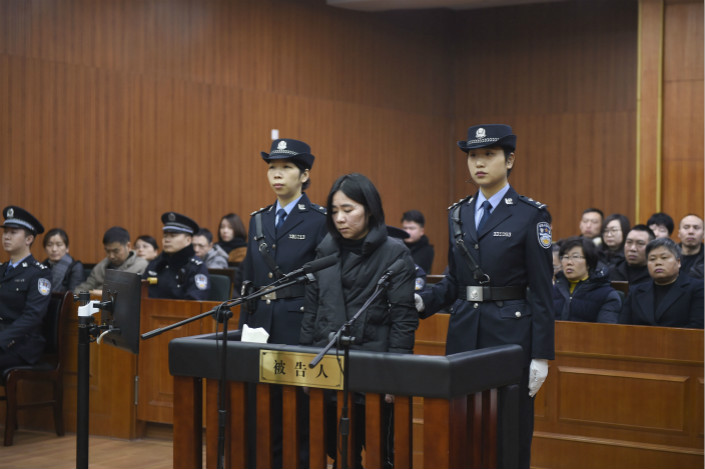 Mo Huanjing (center) confessed in a Hangzhou court to deliberately starting a fire that killed four people, but while the confession could have earned her some leniency under the law, it was not enough to help her avoid the death sentence in this case. Photo: VCG

A maid convicted of starting a fire at her boss’s home in June was sentenced to death on Friday for the arson, which killed her employer and her employer’s three children.

The Hangzhou Intermediate People’s Court in the capital of the eastern province of Zhejiang handed down the death sentence for Mo Huanjing on Friday morning, following a one-day trial on Feb. 1.

Mo, a native of Guangdong province, told the court that she deliberately lit the fire in the early morning of June 22. Mo said she believed she could put out the fire easily, and that her employer, Zhu Xiaozhen, would then lend her more money out of gratitude, according to court documents.

She set a book on fire and threw it behind a sofa next to a large window in her employer’s living room, and the fire quickly spread to a curtain, eventually killing Zhu and Zhu’s three children — two boys aged 4 and 10, and a 7-year-old girl.

Mo, a chronic gambler who had fled Guangdong to escape loan sharks, was hired by Zhu via an agent in Shanghai in September 2016.

Mo confessed to intentionally starting the fire, which could have earned her some leniency under the law, but it was not enough to help her avoid the death sentence in this case, the court said.

There were also delays in firefighting operations during the blaze due to losses of pressure in fire hydrants in the apartment block, the Hangzhou court said. Breaches of fire codes were also discovered in the building, a luxurious apartment block in downtown Hangzhou overlooking the famed Qiantang River. However, these safety lapses pale in comparison with what Mo did to cause the four deaths from carbon monoxide poisoning and damage the building, the court said.

Mo was also sentenced to five years in prison for theft and fined 10,000 yuan.

Her lawyers did not respond to a Caixin inquiry into whether Mo plans to appeal the verdict.