By Wang Jin and Mo Yelin 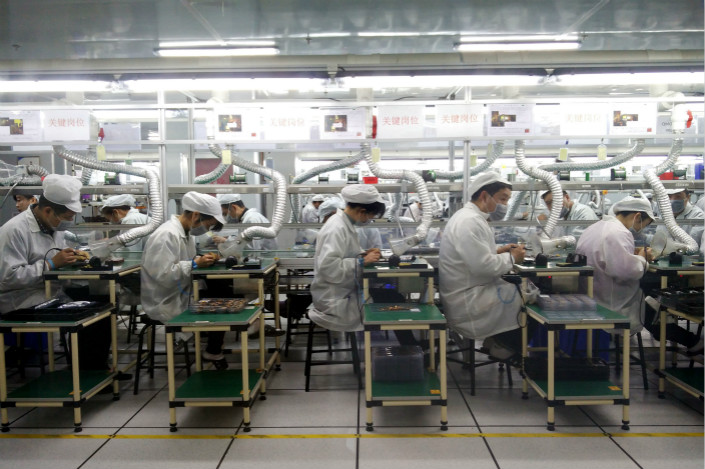 A Foxconn cellphone factory production line is seen in Zhengzhou, Henan province, on Dec. 7. Hon Hai Precision Industry Co. Ltd., which trades as Foxconn, hopes to use the money it raises by listing a major unit on the Shanghai Stock Exchange to develop technologies such as 5G and the internet of things. Photo: VCG

Hon Hai Precision Industry Co. Ltd., which trades as Foxconn, has applied to list one of its major units in Shanghai, tapping into the mainland’s capital market as the manufacturing giant aims to move away from its traditional base.

Foxconn Industrial Internet Co. Ltd. will list in the Shanghai Stock Exchange and issue new shares equivalent to 10% of its total shares, Hon Hai said in an application prospectus published on the China Securities Regulatory Commission’s website on Friday.

The money raised will be used to develop technologies such as 5G and the internet of things, and to build up “industrial digital platforms,” according to the Taiwan-based Hon Hai.

Hon Hai is best known as a manufacturer of products for other big brands like Apple Inc., but has more recently been trying for a digital transformation, partly as a response to the sluggish global mobile-handset demand.

In January, CEO Terry Gou said that Hon Hai aims to become an artificial-intelligence and big-data-driven internet company in the future.

Foxconn Industrial Internet, which was set up three years ago in Shenzhen as a strategic investment platform uninvolved in actual business operations, now has registered capital of 17.7 billion yuan ($2.81 billion), and reported revenue of 354.5 billion yuan in 2017, according to the prospectus.

Hon Hai has since 2015 integrated many of its other subsidiaries into the internet unit, including nine mainland factories that mainly produce electronics.

Previously, Hon Hai separately listed a number of its other major units, including its Hong Kong-listed FIH Mobile unit, which mainly focuses on electronics assembly instead of the actual production process.

To avoid in-house competition, Hon Hai has chosen not to integrate its Zhengzhou factory — the largest in the mainland and whose main business is similar to FIH Mobile — into the internet unit to list in Shanghai, according to the prospectus.