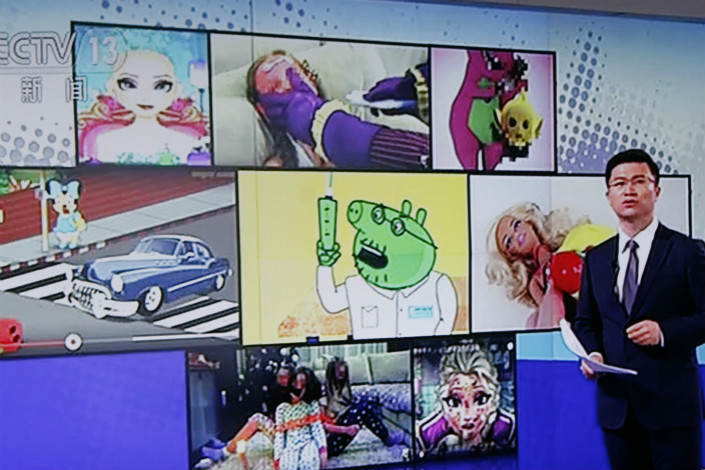 A China Central Television Report on so-called "Elsagate," videos, which feature familiar cartoon characters in inappropriate or bizarre situations. Such videos have been spreading on popular Chinese video platforms such as Youku and iQiyi, Xinhua said. Photo: IC

It may look child-friendly on the surface, but a new type of cartoon containing adult themes like sex and violence has become the latest target of a government crackdown, after appearing on some of China’s most popular video sites.

The campaign against the cartoon videos labeled as “Elsagate” began late last month and will run through April, sponsored by China’s propaganda ministry, cyberspace authority, culture ministry and anti-pornography agency, among others, according to the official Xinhua News Agency. (link in Chinese)

Such videos, which use popular characters, have been spreading on popular Chinese video platforms such as Youku and iQiyi, Xinhua said. They also appear on YouTube and YouTube Kids and contain themes that are inappropriate for children, according to Wikipedia.

The spreading in Chinese cyberspace of Elsagate videos, previously called “poisonous cartoons” by Xinhua, “seriously harms children’s physical and mental health,” according to the news agency often considered a voice of the central government.

It said relevant law-enforcement departments will make sure video-streaming platforms delete the content and that platforms hosting such videos be held accountable.

A Guangzhou-based company that was making Elsagate videos was raided by Guangzhou police on Jan. 22, according to Southern Metropolis Daily. Guangzhou police have launched a criminal investigation into the case, the Beijing News reported last week.

The crackdown is the latest in a series against video and other online content considered unhealthy by regulators, including pornography and sexually explicit content. Late last year, two of China’s popular news sites, Toutiao and Phoenix News, were punished for spreading pornographic content and providing news services without the necessary licenses. And last month, China’s Twitter-like Weibo microblogging platform said it had shut down more than 1,000 accounts, after some of its services were suspended due to what regulators called obscene content.