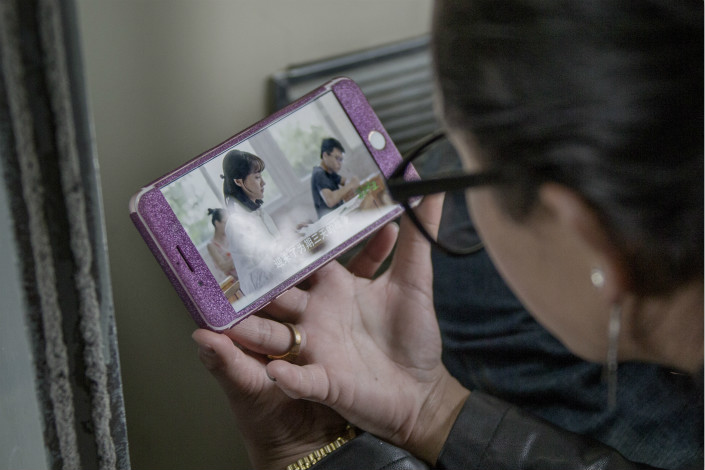 A train passenger watches a video on a smartphone on Aug. 9. Nearly 490 million Chinese used their smartphones to watch video in 2017. Photo: VCG

Nearly two-thirds of Chinese internet users watch video on their smartphones, the highest rate in Asia, fueled by the growing availability of high-quality content in the world’s largest online and mobile markets, according to new data from an industry-tracking firm.

Nearly 490 million Chinese used their smartphones to watch video last year, accounting for 63% of all internet users in the country, eMarketer said in its first mobile video usage report for the Asia-Pacific region. It noted the trend of watching video online has accelerated in China in recent years as providers sign licensing deals with domestic and foreign owners of premium movies, TV shows and other content.

In China, the market is dominated by a group of homegrown players including iQiyi, which is backed by online search leader Baidu Inc.; Youku Tudou, which is owned by e-commerce giant Alibaba Group Holding Ltd.; and a service owned by web portal operator Sohu.com Inc. By comparison, most other markets are dominated by Google-owned YouTube, which is unavailable in China.

“Online video streaming is on the rise in Asia-Pacific,” said Oscar Orozco, senior forecasting analyst at eMarketer. “Viewing is primarily occurring on mobile phones. In China, the availability of content has increased tenfold over the past year, with Baidu’s video platform iQiyi inking a content licensing deal with Netflix, while Alibaba’s Youku Tudou reached a similar agreement with NBCUniversal and Sony.”

Reflecting a preference for watching video on the go, some 84% of Chinese who watch video online did so on their smartphones last year, according to the report. That rate is expected to keep growing steadily, topping 90% by 2021, as mobile internet speeds improve and mobile data costs go down, the report added.

China is home to the world’s largest smartphone and internet markets, with nearly all of the country’s more than 1.3 billion people now using mobile service. Sales of smartphones, the most common mobile device for watching video, reached 444 million units last year, according to data tracking firm IDC. At the same time, the country was home to 772 million internet users at the end of last year, the vast majority of whom access the web from mobile devices, according to government statistics.

Chinese accounted for about 29% of all mobile video viewers worldwide last year, though that figure is expected to decline gradually as the medium gains popularity in other countries. About half of the country’s wireless subscribers now watch video on their mobile phones, with the figure expected to reach about 64% by 2021, according to the report.