Back to School, but Nowhere to Go 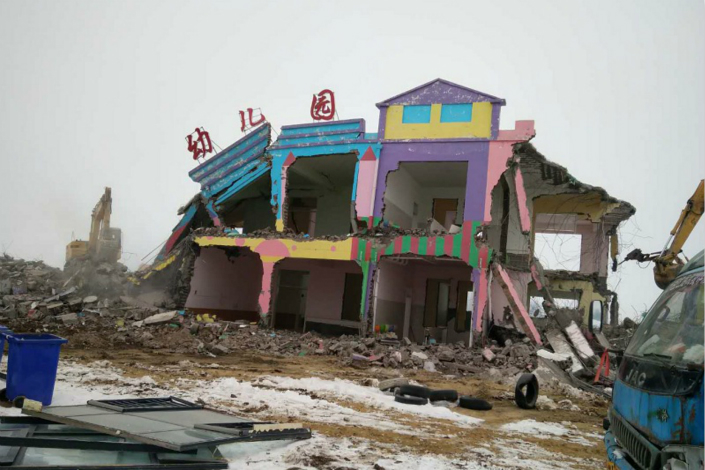 No. 1 Kindergarten in Luyi county, Zhoukou city, Henan province, was demolished in late January. Photo: Courtesy of an unnamed source

As students head back to school after the Lunar New Year on Monday (Feb. 26), thousands of children in China’s central Henan province have been left stranded after their schools were torn down in recent months.

The local authorities in the impoverished city of Zhoukou ordered the bulldozing of dozens of schools, citing unlicensed use of land by school operators. But the institutions, mostly private kindergartens and primary schools, had education licenses and had been allowed to operate for years.

The wave of demolitions came as authorities face mounting pressure to improve educational infrastructure and the quality of teaching at rural public schools, which are increasingly shunned by parents who prefer better-equipped city schools.

Shiliang Experimental Kindergarten in Zhoukou’s Luyi county was demolished by the local government in mid-December, according to the school’s owner Qian Lihong.

The school was built with an investment of 10 million yuan ($1.54 million) in 2016, but the owners said they failed to secure the proper land-use licenses.

Only nine students signed up when it opened in August 2016, but enrollment jumped to 230 a year later even though students were charged a hefty 5,400 yuan a year for tuition and the school bus service. This was far more than what each child would pay to get into state-run kindergarten or school in the area.

Some of Qian’s students have since found spots in public schools. But most have nowhere to go, she said.

Like many rural areas in China, a majority of young adults in Luyi have left for work in big cities like Beijing, leaving grandparents to take care of their children.

Luyi’s city-bound parents preferred to send their children to private schools in smaller towns like Shiliang Experimental because the facilities and teaching quality were better compared to rural public schools. These schools were also cheaper compared to those in the big cities where the parents worked and lived, several Luyi locals told Caixin.

Zhang Hong, who is the main caregiver for her 3-year-old grandson, said her son and daughter-in-law, who are working in the provincial capital Zhengzhou, once thought of taking the boy with them. They changed their mind after they found that a place at an ordinary kindergarten in Zhengzhou would cost them 1,580 yuan a month, which is beyond what they can afford. Instead, they sent the boy to a private kindergarten in the Luyi county town of Shiliang for “a fraction of the cost.”

“It’s a shame that the private kindergartens and schools in my area were demolished because they were just as good as those in Zhengzhou,” she said. “My grandson’s school even had a video link service to connect parents who are away from home with their children any time they want.”

There are now eight private primary schools in the town of Shiliang with a total of 3,500 students enrolled. Meanwhile, demand for public kindergartens and schools is declining, according to an education official with the Shiliang township government.

There were about 19 public primary schools in Shiliang at the turn of the century and each had 400 students on average, but fewer than 700 students were studying in 17 primary schools last year, according to the official who asked not to be named.

Some of the public kindergartens in Shiliang still use open-pit toilets and there have been incidents where children have fallen into the pits, according to locals.

Authorities nationwide have used satellite imaging technology in recent years to clamp down on illicit use of land, particularly in rural areas.

But Qian, owner of Shiliang Experimental Kindergarten, said she had paid nearly 2 million yuan in fines in mid-December for building the school without a land-use license.

The government of Luyi and the authorities of the Zhoukou county of Huaiyang — which has also seen private schools being demolished — did not respond to questions from Caixin. But the Luyi county government on Jan. 6 reposted an earlier report from the state-run People’s Daily saying 240 students at Shiliang Experimental Kindergarten have been transferred to public schools in the same area. However, several locals have dismissed the report, saying “their children still have no schools to go to, but play around at home.”

Zhang Hua, who also lost the private kindergarten he owned in Luyi county to the clampdown, blasted the government “for killing the donkey the moment it leaves the millstone,” or trying to get rid of private education facilities as soon as they were deemed “useless.”

Private investors were encouraged in 2014 to build kindergartens and schools to help tackle a severe shortage of school seats, and they were granted school licenses but not land-use permits, according to Zhang.

Several private school operators in Huaiyang told Caixin that they were led on a tour of Dongfang Primary School by local officials, who touted it as a model for private schools back in 2014 before they decided to invest their cash in their own institutions, which have now been demolished by the government.

Dongfang school in Gedian township, which had several hundred students, was also demolished last year due to the illegal use of land, according to school operators.

In a market economy, both public and private kindergartens and schools should be allowed to compete with each other and serve different social groups, according to Song Yingquan, an associate professor at Peking University.

“The government has done the public a disservice by closing down private kindergartens and schools because the state alone can’t provide the services the public could truly benefit from,” he said.