Momo Pays Nearly $800 Million to Hook Up With Tantan

By Mo Yelin and Lin Jinbing 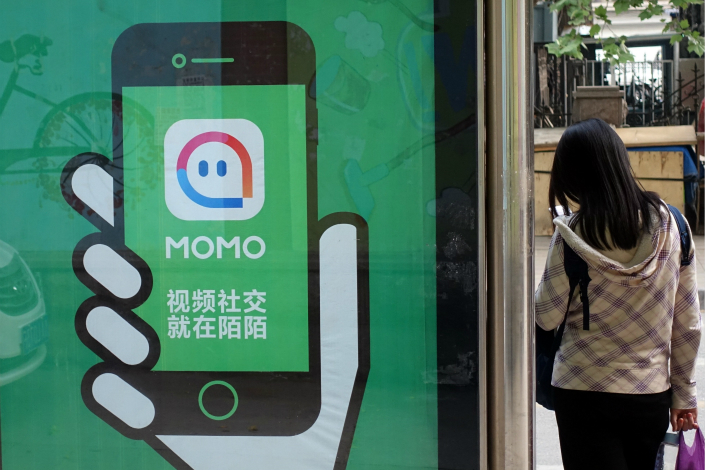 Momo Inc., the operator of a Chinese dating app similar to Tinder, has agreed to wholly acquire Tantan Culture Development Beijing Co. Ltd., the company behind another online dating platform, for a combination of cash and share consideration worth around $790 million in total.

Nasdaq-listed Momo will fund the buyout with $601 million in cash and around 5.3 million newly issued shares, the companies said in a statement on Friday.

The deal is expected to close in the second quarter, according to the statement. The acquisition will help secure Momo’s position as one of China’s largest dating platforms, with 94 million monthly active users as of September.

“Our core position will continue to center on social networking and this acquisition enriches our product line in the social space. We will continue to invest and incubate more sub-brands to serve the social and entertainment needs of different demographics,” said Yan Tang, Momo chairman and CEO.

The deal might help Momo reduce its reliance on livestreaming, which contributed over 80% of its revenue in the first three quarters of 2017. China's booming livestreaming industry has faced tougher regulation, with the authorities cracking down on multiple platforms for hosting pornographic or otherwise vulgar content. This might have an adverse impact on Momo's profits, said a livestreaming industry insider.

Momo reported revenue of $932 million and profit of $221 million for the first three quarters of 2017.

Tang said that the Tantan team will continue to operate the mobile app under the Tantan brand.

Tantan, which allows users to browse others’ profiles based on their location and sexual orientation, much like Tinder, has grown rapidly since it was founded in 2014.

Tantan said it has facilitated about 5 billion user matches, making it one of the most popular ways for young Chinese singles to find dates. As of June 2017, Tantan has around 60 million users and 6 million daily active users, most of whom were born after 1990.