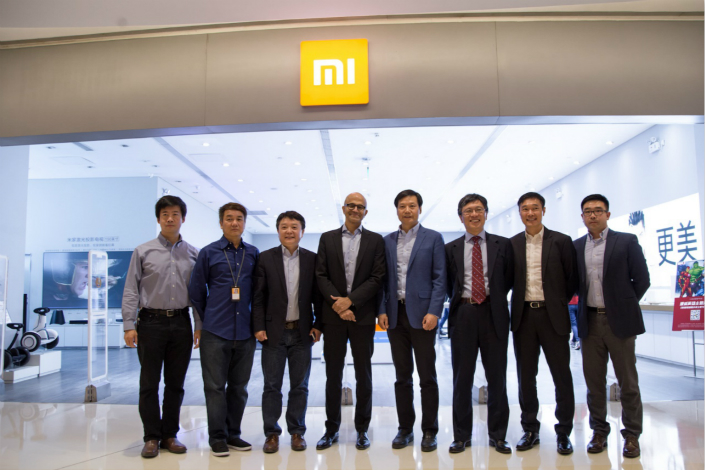 Microsoft CEO Satya Nadella (fourth from left) meets with Xiaomi CEO Lei Jun (fifth from left) at a Xiaomi store in China on October 31. The latest strategic agreement between the two builds on a 2-year-old partnership. Photo: Microsoft

Microsoft Corp. and Xiaomi Inc. signed a strategic agreement to work together in areas that combine their software and hardware strengths, deepening a nearly 2-year-old partnership as the Chinese smartphone-maker prepares for a multibillion-dollar IPO later this year.

The memorandum of understanding announced by the pair on Friday will see them collaborate in cloud computing, artificial intelligence and the development of equipment for use with notebook computers, they said. They will also collaborate in personal assistants using their own existing devices, including Microsoft’s Cortana.

The latest agreement comes a year and a half after Xiaomi agreed to acquire about 1,500 of Microsoft’s patents for undisclosed terms, in what the pair called the start of a long-term partnership. Microsoft had previously purchased the cellphone assets of former giant Nokia in an attempt to get into that business, but ultimately decided to scrap the initiative.

“We’ve been very happy in our collaboration with Microsoft, and we’re very happy to continue deepening the relationship with the signing of this strategic memorandum of understanding,” said Xiaomi Senior Vice President Wang Xiang. “Xiaomi’s mission is to let everyone in the world enjoy technology. This collaboration with Microsoft in many areas of technology will help us to more quickly deliver more outstanding products and services to our users.”

Xiaomi announced the tie-up as it is trying to raise its profile in the run-up to a highly anticipated IPO in Hong Kong later this year that could raise more than $10 billion, making it one of the year’s largest. The company was once one of China’s hottest high-tech startups following its founding in 2010, banking on its trendy smartphones and a savvy online-only sales and marketing strategy.

But it later stumbled as that same strategy created bottlenecks and it also suffered from quality issues. Recently it has engineered a comeback, which included a fourth place finish in last year’s fourth quarter among the world’s top smartphone brands, as its unit sales nearly doubled. The company also become India’s top-selling smartphone brand for the quarter, stealing the position from former leader Samsung.