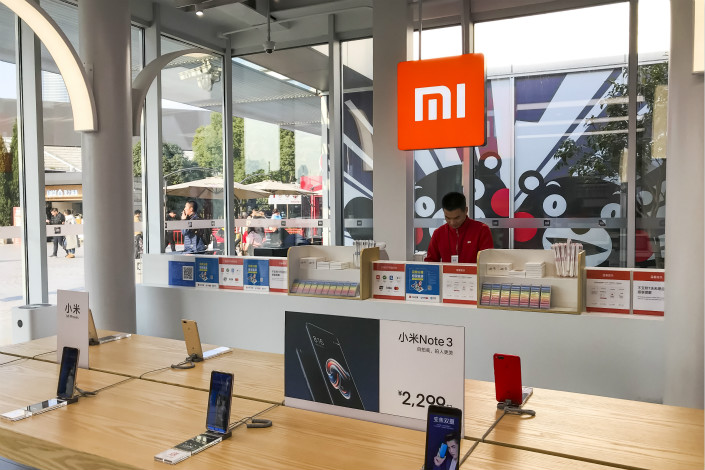 Xiaomi Inc. products are displayed at the Oriental Pearl Radio & TV Tower in Shanghai on Dec. 21. Xiaomi sold 31 million smartphones in the final three months of 2017, up 83% from a year earlier and giving it 7.5% of the global market. Photo: VCG

Sales for smartphone maker Xiaomi surged in last year’s fourth quarter as the company extended its comeback, lifting it back into the global top five brands as global leaders Apple, Samsung and Huawei lost ground, according to data released on Friday.

Xiaomi Inc. sold 31 million smartphones in the final three months of 2017, up 83% from a year earlier, giving it 7.5% of the global market, according to research firm Counterpoint. Its sharp gains contrasted with hometown rival Huawei Technologies Co. Ltd., whose sales slumped 9%, marking the biggest decline in the top five. The decline gave Huawei 9.9% of the global market, making it third behind leaders Apple Inc., with an 18.6% share, and Samsung, with 17.9%. Both of those leaders also posted sales declines during the quarter.

“For the first time in the fourth quarter, shipments of 7 out of the top 10 brands declined year-on-year, signaling a tough quarter for most,” said Jeff Fieldhack, Counterpoint’s research director. “Xiaomi, Oppo and Vivo were the only brands among the top 10 which grew year-on-year — mostly due to strong performances outside of China.”

Seven of the top 10 smartphone brands during the quarter came from China, attesting to the market’s rapid rise as both a consumer and manufacturer of the products. But Chinese firms have also suffered some of the biggest recent sales declines due to stiff competition at home, following several years of heated price wars as they fought for share. Xiaomi’s recent resurgence follows its own earlier fall from grace, as it gets set for a Hong Kong IPO later this year.

The biggest loser during the quarter was ZTE Corp., whose sales plunged 41%, as it shipped 9.7 million units. Meizu Technology Co. Ltd., backed by e-commerce giant Alibaba Group Holding Ltd., also suffered a sharp 30% drop, while struggling PC giant Lenovo Group Ltd.’s smartphone sales also fell 13% for the quarter. The Chinese brands were hit particularly hard by saturation in their home market, where penetration is high and models can often sell for the equivalent of $100 or less.

Out of all the regions tracked, only the developing markets of the Middle East, Africa and India posted growth during the quarter, said Counterpoint analyst Shobhit Srivastava.

“However, decline in shipments in China and Europe impacted the overall smartphone market, leading to a decline of 5% for the first time ever in the fourth quarter,” he said. “Going forward, the global smartphone market growth will be linked to the upgrade rate of users across different regions. … This will eventually mean that handset brands will need to adopt a regional specific strategy to push users to upgrade faster than their current cycle.”