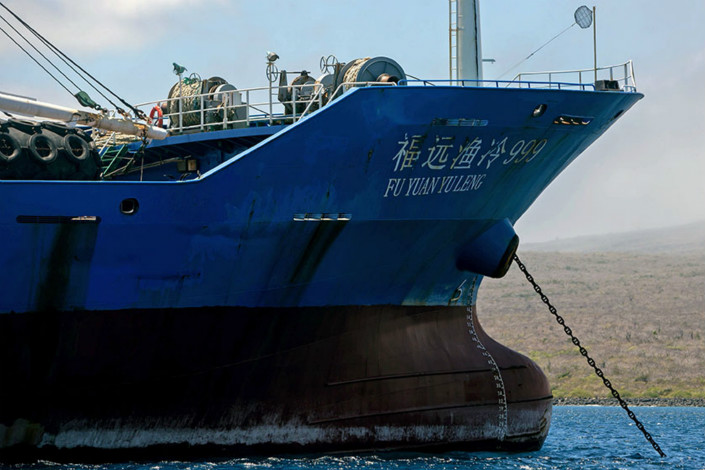 The captain of the refrigerator ship Fu Yuan Yu Leng 999 (above) has been placed on a fishing-industry blacklist, six months after the vessel was found carrying 6,223 sharks in the protected waters around Ecuador’s Galapagos Islands. Photo: VCG

The Chinese government has suspended the distant-water fishing activity of a company involved a shark-smuggling case near Ecuador last year, Caixin has learned.

The Ministry of Agriculture has temporarily halted the operations of all 78 distant-water fishing vessels owned by Fujian-based Fuzhou Honglong Ocean Aquatic Products. The move comes six months after a refrigerator ship owned by the company was caught in the Galapagos Marine Reserve with thousands of shark carcasses onboard, according to a document seen by Caixin.

The company has also been ordered to suspend production, and the captain of the vessel involved in the Galapagos case — the Fu Yuan Yu Leng 999 — has been placed on an industry blacklist, the document said.

In August, the Fu Yuan Yu Leng 999 was found carrying 6,223 sharks in the protected waters around Ecuador’s ecologically rich Galapagos Islands. The ship’s cargo included baby sharks and endangered species like the scalloped hammerhead. The vessel and its crew were detained. Ecuadorean courts later found the captain and crew guilty of the possession and transport of protected species and sentencing them to prison and fined a total $5.9 million.

According to the Chinese Ministry of Agriculture document obtained by Caixin, the Fu Yuan Yu Leng 999 had been authorized to transport squid in the high seas of the southwest Atlantic and southeast Pacific oceans. But the vessel had engaged in illegally activity by transporting unauthorized loads of tuna and sharks, including species considered threatened under the Convention on International Trade in Endangered Species of Wild Fauna and Flora, the document said.

Fuzhou Honglong’s vessels are part of China’s growing fleet of distant-water commercial fishing waters, which the country is struggling to regulate. Chinese vessels are the most active and travel the most for their catch, far outpacing their nearest competitors, a recent international fishing industry survey showed.