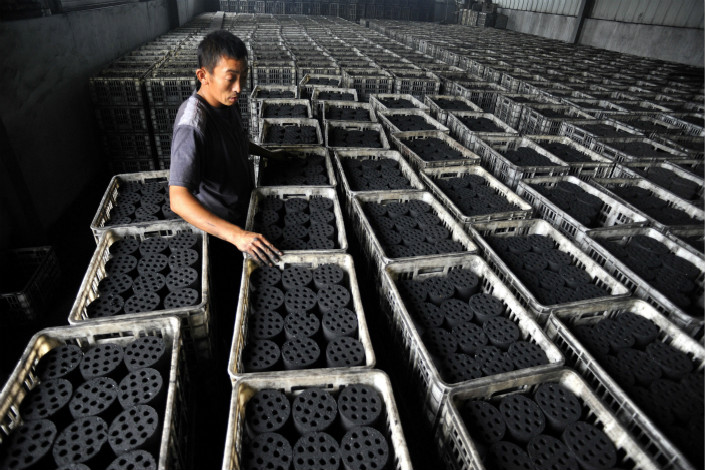 China’s coal consumption in 2017 grew for the first time in three years, despite a major government effort to cut pollution and reduce the country’s dependence on the fuel.

The absolute volume of coal consumed in China last year rose 0.4%, compared with a 4.7% decline in 2016, the National Bureau of Statistics said in its annual National Economic and Social Development Communique published Wednesday. The bureau did not reveal the exact amount of coal consumed.

The total amount of energy used by the world’s second-largest economy also rose, by 2.9%, to 4.49 billion tons of standard coal equivalent, according to the communique.

Although there was an absolute increase in coal consumption — the first since 2013 — coal-fueled energy made up a smaller percentage of the total energy consumed by the country last year. Meanwhile, the proportion of “clean” energy — defined as forms of energy including natural gas, hydropower, nuclear and wind power — grew. In 2017, coal-fueled energy accounted for 60.4% and clean energy accounted for 20.8% of China’s energy mix, compared to 62.0% and 19.7% in 2016.

“The main driver behind the 2017 coal consumption surge is the strong growth of coal-fired power generation,” Liu said. “This even offset the negative impact which resulted from switching from coal to gas for heating. The total power demand in 2017 grew more than 6% year-on-year, of which industry demand recovered significantly. This, from the demand side, pushed up power generation. On the supply side, hydropower in the first half of 2017 suffered from dry weather and left good space for coal-fired power.”

“Even though renewables saw dramatic capacity and generation increases, due to their limited scale, most of the incremental demand was still met by coal-fired power,” Liu said.

However this rebound “has shown signs of abating since mid-2017,” Lammi said.

At the same time, local and central authorities rushed to replace coal-fueled energy with natural gas power in 2017, the final year of a four-year national clean air campaign, driving up demand for natural gas.

But the coal-to-gas campaign backfired due to a combination of poor planning, a natural gas shortage and severe weather during the winter heating period, the annual peak season for energy usage. The resulting heating crisis in northern China put pressure on the country’s coal supply, with coastal cities easing restrictions on coal imports by December, and capital city Beijing issuing an emergency order to relight its decommissioned coal generators.

Despite last year’s uptick in coal consumption and the chaos of the coal-to-gas campaign, China appears to remain on track to increase its use of cleaner energy. The country’s investment in large overseas low-emissions energy projects hit a record $44 billion in 2017, which was also a “record-setting year for renewable installation in China,” according to a recent report by the Institute for Energy Economics and Financial Analysis.