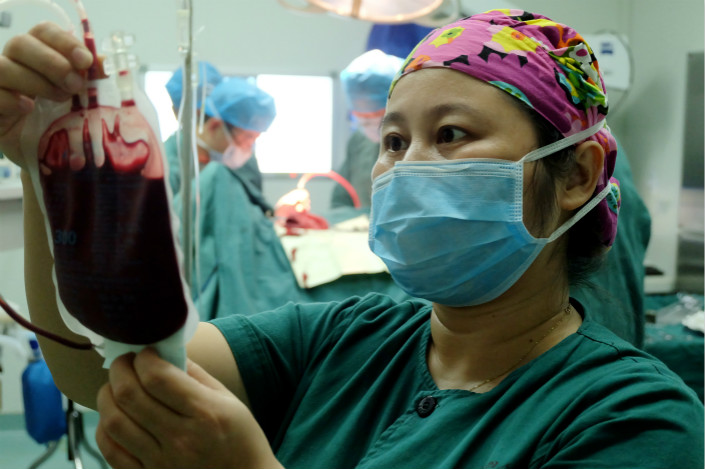 When Xiaochen heard there were no platelets in the blood bank run by Red Cross in Beijing he was devastated.

“There's no blood anywhere… I'm sorry, everyone, I'm exhausted and I feel I want to give up on life,” wrote the 24-year old patient suffering from aplastic anemia, a rare disease in which an individual suffers a blood shortage due to bone marrow damage.

His post on Chinese microblog site Weibo on Feb.16 echoed the desperation of thousands of patients caught in an unexpected — and avoidable — blood shortage crisis.

What has been termed a “blood famine” in the city by several patients and doctors was triggered after local health authorities suddenly notified all local hospitals to stop accepting blood donations from family members or friends of patients. The notification (link in Chinese) was only published on Feb. 9, a day before the rule came into effect.

The public outcry that has lasted for weeks sheds light on the authorities’ tendency toward arbitrary decision-making, which has left the health system paralyzed.

‘Sleep all the time’

Authorities said they are trying to crackdown on an underground network of blood sellers, known as “blood heads,” who abused the family donation system. Under China’s reciprocal blood donation system, patients can ask their family members or friends to donate blood of the type they want to receive. After showing certificates of donation to the hospital, patients were assigned the same amount of blood for their personal use. But, illicit blood sellers usually paid people to impersonate patients’ relatives, give blood and later sell the donation certificates for huge profits to desperate patients.

A story of a middle-aged man who died of influenza in late January, which led to outrage on Chinese social media, revealed that the patient’s family encountered shady blood dealers who charged 1,500 yuan ($237) for 400 cubic centimeters of blood, operating inside the hospital.

Some underground dealers earned more than 1 million yuan (HK$1.2 million) a year, according to a recent report by Shandong Satellite Television.

This black market has also led to a growing number of health scandals, as blood brokers bribe workers at collection centers to ease screening procedures, leading to substandard blood products entering the market.

But the abrupt government decision, announced days before the Lunar New Year holiday, left thousands of patients in limbo. People undergoing surgery or requiring an urgent blood transfusion were left in the lurch for days, according to media reports and postings on Chinese social media.

“I feel tired and I just want to sleep all the time,” said Chen Xi, a 21-year-old leukemia patient at Peking University People’s Hospital, whose platelet count dropped to a dangerously low level on the eve of the Lunar New Year on Feb. 15.

A healthy person has around 150,000 to 450,000 platelets per microliter of blood. Chen Xi’s platelet count was still below 20, when Caixin followed up four days later, and his parents were calling blood banks across the city to find AB-positive platelets.

Ghost of a scandal

Family or replacement donations by the patients themselves have long been a vital part of China’s blood supply.

The level of voluntary donations in China remains low due to a lack of awareness and fear. The ghost of a high-profile scandal in which thousands of people contracted HIV in the 1990s after selling their blood to unsanitary, often state-run clinics, continues to haunt public memory and dissuade people from stepping into the mobile donation vans seen in prominent public squares in most cities. Blood dealers, lurking around government-run donation centers, also deter volunteers.

Only 14 million people — or 1.05% of the population — donated blood in 2016, according to the National Health and Family Planning Commission. The World Health Organization (WHO) says that in order to maintain an adequate blood supply, about 3% of the population needs to be blood donors.

The Beijing Red Cross Blood Centre announced on its website on Feb. 25, that it is trying to secure blood supplies in various ways. This includes increasing the number of mobile blood donation centers, encouraging group donations by university students and military men, and scouting for inter-provincial transfers.

But these interprovincial transfers from places including Hebei, Shanxi, Hubei, and Hunan have led to a public backlash.

One Weibo user from Hunan with the online moniker “Wenshi” said he was angry to learn that the province’s blood supplies were being diverted to Beijing, because his mother’s liver operation was postponed thrice due to a lack of blood at his local hospital.

Big hospitals in Beijing are trying to find ways to get around the regulation. Peking University People’s Hospital, the Aerospace Center Hospital and others have written to relatives of past and present patients and asked them to donate platelets at the hospital, which would then be transferred to the local blood bank.

But, efforts to quickly ramp up donations have faced a bottleneck. A volunteer at Peking University People’s Hospital said its donation center was only processing 20 people a day. Also, majority of those who have responded to the distress call were first time donors, and on average, only about 60% of them were qualified to give blood.

“Blood supply is so tight that it’s being rationed now,” according to a Beijing health-care official who wished to remain anonymous. While hospitals were earlier allowed to maintain reserves in case of emergencies now “blood banks are told to issue blood products to hospitals for specific cases. Special groups such as pregnant women and infants get priority; second on the list are patients with blood disorders such as leukemia. But this means other routine operations are being pushed back by days or weeks until blood is available.”

Despite the chaos it has created, China’s top health authority — the National Health and Family Planning Commission (NHFPC) — appears confident about its new policy.

On Feb. 1, the NHFPC told Beijing News that the decision was made after a careful study of the national blood supply.

“Judging from the nationwide development of voluntary, unpaid blood donations, and experts’ research and analysis, China is ready to put an end to the family or replacement blood donation system,” the NHFPC said. “Therefore, [we have] demanded that the whole nation to stop this practice by the end of March 2018, except in remote areas.”

After the rule came into effect, many doctors took to social media to say they were not consulted before this decision was made. This created extra work for censors who were busy taking down posts critical of the policy, including stories of suffering from patients.

Meanwhile, a similar crisis is unfolding in Shanghai, Tianjin and Wuhan, regions that had also called an end to family donations before Beijing. Chinese media reports show that many desperate patients are now turning to the same blood brokers that the government was trying to clamp down on.