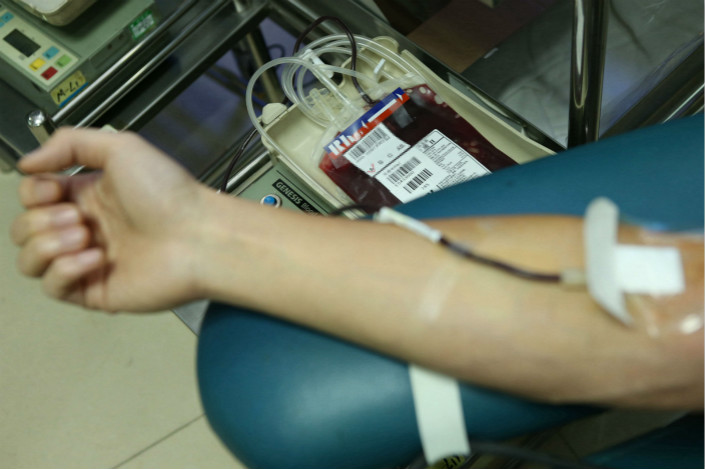 Beijing city officials have ordered hospitals and blood centers to halt a family blood donation program as part of tightened oversight of donations and transfusions that was ordered by the national health authority. Photo: VCG

Health authorities in China’s capital have barred patients from enlisting family and friends to donate blood for them amid concerns that abuse of the system by “blood brokers” has put people at risk of transmittable diseases.

But the restriction comes during a seasonal blood shortage that has left needy patients in limbo.

Beijing has ordered hospitals and blood centers to halt a family blood donation program as part of tightened oversight of donations and transfusions that was ordered by the national health authority, the city’s Health and Family Planning Commission said recently.

About 14 million people — or 1.05% of the population in China — donated blood in 2016, far below the 3.3% recorded in developed countries, according to the National Health and Family Planning Commission.

Unlike donations from anonymous volunteers, the family replacement program, which also allows donations from friends, is critical to supply blood for patients who have hematological defects or need large quantities for major operations, particularly when hospital stocks are low.

The program is legal under Chinese law, but has been undermined by loopholes and a lack of transparency, giving rise to so-called blood brokers who arrange deals between vulnerable patients and professional blood sellers, particularly in large cities that are prone to seasonal fluctuation in donations.

On the black market, blood brokers can pay hundreds of dollars for 200 to 400 milliliters of blood — roughly the amount from an average donation — according to Chen Jing, a specialist at Shanghai Children’s Medical Center.

People from high-risk groups, such as drug addicts, are prohibited from donating, and prospective donors are required to undergo screening for viruses such as hepatitis B and HIV before they can volunteer donors.

Middlemen have helped disguise blood sellers as a patient’s family and friends, and the patients have no knowledge of the risk status of the donors. But the ban has also hit patients seeking legitimate care.

Xiaochen, a patient with aplastic anemia in Beijing, said he began to have bleeding in his gums and digestive tract due to low platelet count, but was no longer allowed to enlist family and friends to help resupply his depleted blood cells.

The curb comes as potential volunteers, students and out-of-town workers leave Beijing in droves for the Lunar New Year holiday, meaning that supplies at blood centers are dwindling and patients like Xiaochen have to wait longer to get the blood they need.

A healthy person has around 150,000 to 450,000 platelets per microliter of blood. Xiaochen told Caixin that some of his fellow patients, who have been unable to receive transfusions due to low blood-bank stocks, now have as few as 3,000 platelets per microliter, putting themselves at risk of internal bleeding. That information could not be verified by health care providers.

Hospitals and blood centers in Shanghai have not yet received a clampdown order, said Shanghai physician Chen. But the municipality also experiences severe shortages during holidays, and restrictions on family donors could exacerbate the problem, she said.

Demand for blood could outpace supply fourfold at Chen’s facility because of the high number of patients who need marrow transplants, she said.

Seeking to limit abuses of the family donation system is warranted because of concerns over blood safety, but regulators must strike a balance between supply and demand when introducing new policies, Chen said.

“The blood supply is already low. So where do we expect patients to get blood to keep themselves alive if they can no longer turn to their family and friends for help?” Chen said.

One physician at a major hospital in Beijing told Caixin that mismanagement of government-run blood centers, including inefficient use of donations, has led to abuse of the family program.

Amid fears among health care workers and patients of dwindling supplies, an official with the Beijing health commission told Caixin that it would take a case-by-case approach to decide if patients could still enlist family or friends to give blood while the ban is in place.