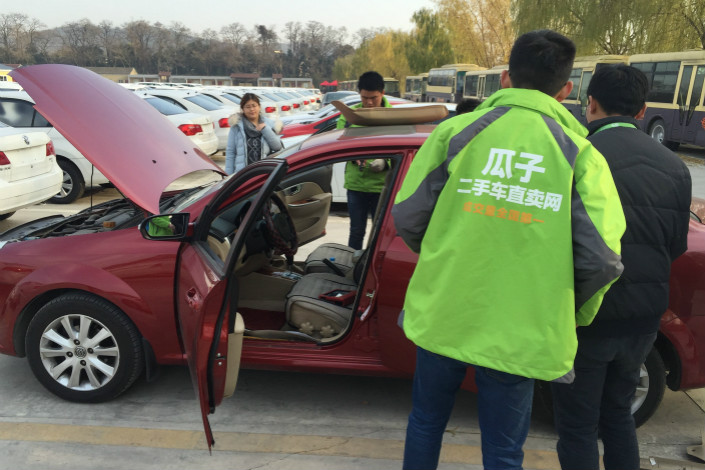 Online car-trading platform Chehaoduo said it will use the money it raised in its latest round of fundraising to upgrade technology, beef up marketing campaigns and open new brick-and-mortar shops. Photo: IC

Online car-trading platform Chehaoduo Group has netted nearly $820 million in its latest round of fundraising from a consortium led by internet giant Tencent Holdings Ltd., as competition for market share in the world’s biggest car market heats up.

Beijing-based Chehaoduo said in a statement that other major investors in the Series C round include Sequoia Capital, Yunfeng Capital, ICBC International and IDG Capital.

Chehaoduo, which operates two brands — Guazi for used cars, and Maodou for new vehicles — said it will use the capital to upgrade technology, beef up marketing campaigns and open new bricks-and-mortar shops. The company currently also offers car-appraisal, vehicle-financing and insurance services.

The company achieved a “unicorn” status in October after raising $180 million in its Series B+ round. It started its engine in 2015 with a $60 million angel round.

China has seen its used-car sector develop quickly over the last few years. Transactions of used cars rose about 20% to 12 million units in 2017, according to data from the China Automobile Dealers Association.

“These platforms are competing to raise money for their business expansions in the used-car sector as there is not yet a clear dominant player as the market is still in a nascent stage,” Wang Cun, an analyst with the association, told Caixin.

Chehaoduo, which claims Guazi as China’s largest online used-car trader by volume, is expected to face growing challenges from rivals that include Renrenche, Chezhibao, Uxin and Tiantianpaiche. Many of them have had funding rounds recently.

Renrenche on Thursday won a deal from ride-hailing platform Didi Chuxing, in which the latter will purchase over 2 million used cars from the company in the next three years. Didi backed Renrenche in a $200 million round in September.