Postgraduate Enrollments Jump by 20% in 2017

By Su Huixian and Li Rongde 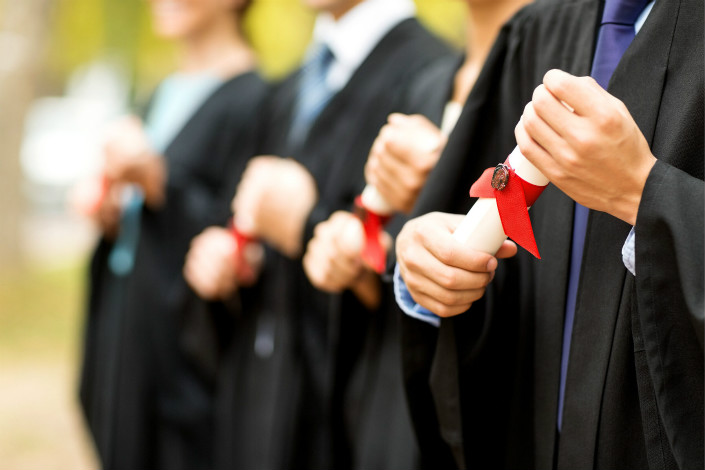 The surge in the number of postgraduates has been driven in part by a change in statistical methodology, but an analyst told Caixin that the tough graduate job market and how college funding is allocated has also played a role. Photo: VCG

Annual enrollment of postgraduate students in China jumped by more than 20% from a year earlier to 805,000 in 2017, according to the National Bureau of Statistics (NBS).

The number of students opting for postgraduate studies has increased in recent years, but last year’s jump has raised concerns among academics who say it might compromise the quality of teaching.

Some 2.64 million students were studying for a masters or doctoral degree in China at the end of 2017, 50% more than five years ago, NBS data released on Wednesday show.

Last year’s surge has a lot to do with a change in the way the NBS does its calculation. For the first time, the figure includes students who pursue postgraduate studies part-time, according to analysts.

But, the persistent rise in demand for places at graduate schools might also be driven by the failure of bachelor’s degree-holders to secure jobs.

China has a severe shortage of skilled workers. At the same time, there is an oversupply of undergraduates who lack vocational skills, according to government human resource authorities.

There is also a hidden motive for universities to push their undergraduate students to apply for higher degrees. College funding is tied to the employment rate among graduates and students who are admitted to graduate schools are counted as having found a job under the current evaluation system.

Schools have prodded their students to pursue postgraduate studies, but that often comes at the expense of learning work-related skills during their undergraduate years, according to Professor Xiong Bingqi, deputy director of the 21st Century Education Research Institute in Beijing.

Some less prestigious universities put all their focus on helping students secure positions in postgraduate programs to hush up the poor employment rate among alumni, and students don’t have a chance to learn practical skills, Xiong said.

For example, some students admitted to elite graduate schools don’t know how to use basic lab equipment, he said. Many universities that have rushed to open graduate schools to meet soaring demand do not have the required resources for postgraduate teaching, according to Xiong.

Policymakers must promote the acquisition of skills and discourage students from simply collecting higher diplomas if they want to raise the level of teaching at Chinese universities, Xiong said.

Some 7.36 million undergraduate students graduated last year, more than one million more compared to five years ago, according to NBS.