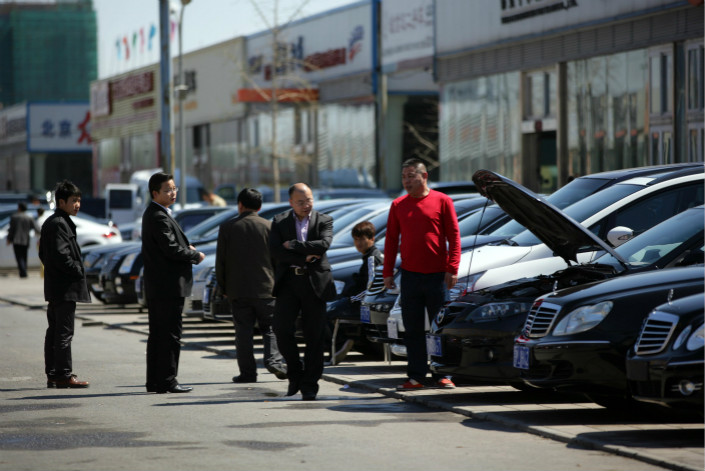 A used-car market is seen in Huaxiang township in Beijing in April 2017. Analysts said that China's plan to remove restrictions on intercity used-car transactions will be a challenge as regional governments are expected to resist the move. Photo: VCG

China’s used cars will soon be able to hit the road for sale around the nation, as the government has announced it will lift intercity purchasing restrictions to boost the growing sector.

No specific date has been given for the implementation of the policy, which was unveiled in Premier Li Keqiang’s annual government report to the country’s legislature on Monday.

Local governments have long used regional license plate registration systems to prevent cars bought outside their respective regions from being registered for a local plate, and such policies have essentially acted as protectionist measures for the local auto industries.

The used-car market has been developing rapidly over the past last few years, as growth in sales of new vehicles has slowed in the world’s largest car market.

A total of 28.88 million units of new passenger vehicles were sold in China in 2017, a 3% rise from 2016. Meanwhile, sales of used cars rose about 20% to 12 million units in 2017, according to data from the China Automobile Dealers Association.

Industry experts expect that the removal of regional restrictions will help drive the volume of transactions in this fledgling sector even higher.

“The registration hurdle has long limited some big cities like Shanghai and Beijing — which have the largest stock of used cars — to trade only within their domain,” said Zeng Zhiling, general manager of LMC Automotive, a Shanghai-based industry consultancy.

Zeng added that the policy will finally integrate the nationwide used-car sector into a “single market,” which will “definitely improve the efficiency of transactions.”

However, the implementation of this policy is expected to be challenging as it will face resistance from the local governments, analysts said.

Monday’s announcement is the next step in a deregulation plan that the State Council, China’s cabinet, began back in 2016 when it laid out plans to remove such restrictions in 299 smaller cities. This regulation did not include 15 major cities such as Beijing and Shanghai.

However, since then, many of the affected cities have either refused to implement the new rules or have created new protectionist barriers — such as raising the environmental standards out-of-town used cars must meet — to circumvent the order, said Wang Cun, an analyst with the China Automobile Dealers Association.