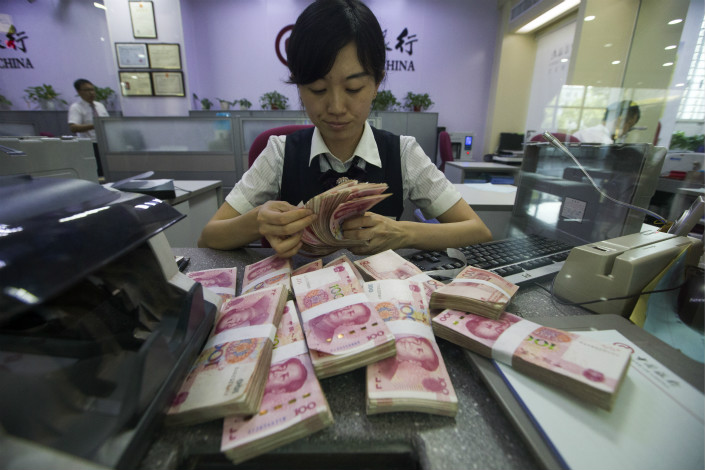 Banks that fulfill certain conditions will be able to reduce their loan-loss provisions to as low as 120% of their bad loans, the China Banking Regulatory Commission said. Photo: VCG

China’s banking watchdog will allow lenders to lower the amount of cash they need to set aside to cover losses from bad loans, provided they meet certain criteria.

The move comes as stringent current standards have left lenders struggling to increase profits amid the government’s financial deleveraging campaign.

Banks that fulfill the conditions will be able to reduce their loan-loss provisions to as low as 120% of their bad loans, the China Banking Regulatory Commission (CBRC) said in a note issued last week. The previous floor was set at 150%. The minimum ratio of provisions to total loans has also been relaxed to 1.5% from 2.5%.

The changes mark a partial victory for commercial banks that have been lobbying regulators since early 2016 to loosen the requirements, although the drop falls short of the 100% to 120% range they were seeking, as previously reported by Caixin.

Zeng Gang, a deputy director of the National Institution for Finance and Development, a government-linked think tank, said the reduction was introduced after banks’ bad-loan ratios stabilized and they were forced to classify more lending as nonperforming loans after authorities stepped up scrutiny last year amid the campaign to force the financial sector to deleverage.

“Moderate adjustments to the regulatory requirements are reasonable, and they can increase banks’ profits,” he said.

Loan-loss provisioning has added to pressure on Chinese banks’ earnings over the past few years. Lenders have struggled to boost their profits as interest-rate liberalization has squeezed net interest margins — the difference between the interest rates lenders charge borrowers and offer savers — and as growth in income from fees and commissions has failed to compensate for the shortfall. Some banking-industry insiders have said lenders opted to reduce the proportion of loans they classify as nonperforming so that they could reduce their loan-loss provisions, which enabled them to bolster their earnings.

Growth in net profits of listed Chinese banks slowed for five consecutive years from 2011 to 2015, according to data from global professional services firm EY. But the rate of increase edged up to 3.65% in 2016 from 2.85% the previous year, after the growth in provisions for loan impairment slowed to 15.11% from 52.94%, the company said in its annual report on listed banks in China.

For example, banks that label all lending overdue for longer than 90 days as nonperforming loans will have their required loan-loss provision ratio lowered to 120% and their provision-to-total loans ratio reduced to 1.5%, according to the note. The requirements will remain at 150% and 2.5% respectively for lenders that classify less than 70% of such overdue debt as nonperforming loans.

The regulator told banks that any increase in profit resulting from the reduction in loan-loss provisioning must be retained to ensure their ability to write off potential losses on loans and must not be used to hand out bonuses to bank employees or dividends to shareholders.