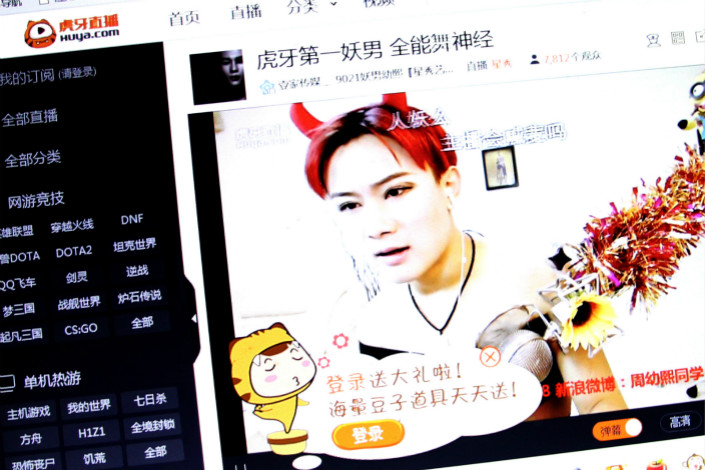 Huya has made a confidential filing to the U.S. securities regulator for the separate listing, according to YY, which has been listed on the Nasdaq since late 2012. Over that time, YY’s shares have jumped about 11-fold, including a more than doubling over the last 12 months amid a broader wave of positive sentiment toward U.S.-listed Chinese stocks.

Companies like YY are now hoping to take advantage of that positive sentiment with new listings like the one proposed for Huya. Under the plan, Huya would issue American Depositary Shares (ADS), YY said in an announcement with its latest quarterly results, without naming a specific exchange.

“The number of ADSs proposed to be offered and sold and the dollar amount proposed to be raised in the proposed IPO have not yet been determined,” YY said. “The proposed IPO is expected to commence after the Securities and Exchange Commission completes its review process, subject to market and other conditions.”

YY shares tumbled 12.3% in the latest trading session in New York, and fell another 3.6% in after-hours trade after the company released its latest quarterly earnings report that included disclosure of the Huya spinoff plan. The report saw YY forecast revenue growth would slow to between 32% and 39% in the current quarter through March, versus 46% growth in last year’s fourth quarter.

The Huya IPO plan marks the latest for a vibrant group of venture-backed Chinese high-tech firms that are looking to take advantage of the recent wave of positive sentiment on Wall Street dating back to late last year. In one of the biggest deals of that wave, online video site iQiyi Inc., which is backed by online search giant Baidu Inc., announced plans last month to raise up to $1.5 billion through a New York listing. Last week, another online video site, Bilibili Inc., announced its own similar plan to raise up to $400 million.

Most of the companies now eyeing New York are looking offshore due to long waiting lines and a stricter review process for listings on China’s domestic stock markets. But the Chinese regulator is studying a plan that would allow many such offshore-traded firms to make secondary listings at home using China Depositary Receipts, sources have told Caixin.