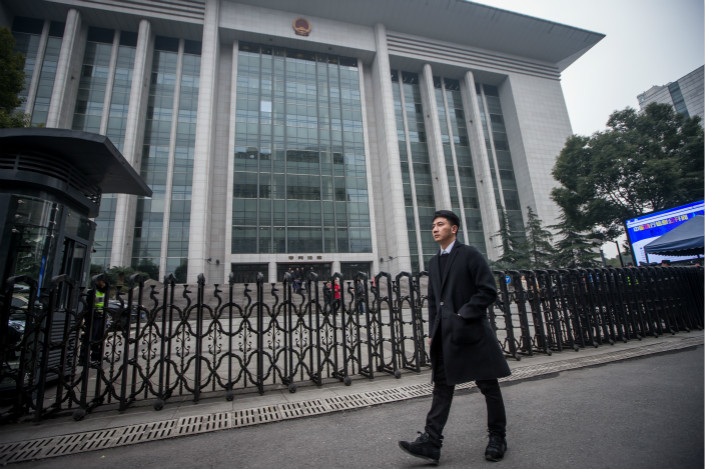 Lin Shengbin stands outside the Hangzhou Intermediate People’s Court in the captial of Zhejiang province on Feb. 9. Lin has been battling the city's fire department for almost half a year to gain access to files linked to his family's death. Photo: VCG

A father of three is seeking a court order for records that could shed light on whether firefighters mishandled an apartment fire in Hangzhou that killed his wife and children in June.

The case will be heard by a district court in the eastern city of Hangzhou, Zhejiang province, though a trial date has not been set, said the father, Lin Shengbin, whose wife, two sons — aged 4 and 10 — and 7-year-old daughter died in the fire.

The fire was set deliberately by the family’s maid, Mo Huanjing, inside their home in an up-market apartment in downtown Hangzhou on June 22, according to court documents.

Mo, who was sentenced to death on Feb. 1, had told police that she set the fire in order to extinguish it quickly and thus curry favor with the family. Specifically, Mo was hoping the family would allow her to borrow additional funds because she had already gambled away previous loans.

A Caixin investigation found delays in the firefighter response to the blaze due to a loss of pressure in the apartment block’s fire hydrants. Fire code violations were also identified in the building, according to the earlier report by Caixin.

The findings were supported by Hangzhou Intermediate People’s Court, which heard Mo’s case. However, the safety lapses paled in comparison to Mo’s actions, which directly led to the four deaths from carbon monoxide poisoning, the court said.

Lin has been battling the city fire department for more than five months to gain access to files linked to the fire, but has been unsuccessful. Under the country’s public information disclosure provisions, he specifically requested access to the official report on the fire, logs in connection with firefighting operations and surveillance camera footage in possession of the city’s police, which oversees the fire department.

The Lin family deserves to know if any possible negligence with the city firefighters had led to failure to save the four lives in the two-hour operation, particularly given that first responders were immediately alerted to the fire, according to Cao Gang, a lawyer at Beijing Yingke Law Firm.

Access to information by the family is also crucial to any lawsuit that the Lin family might file against the fire department or the company that manages the apartment building, Cao said.