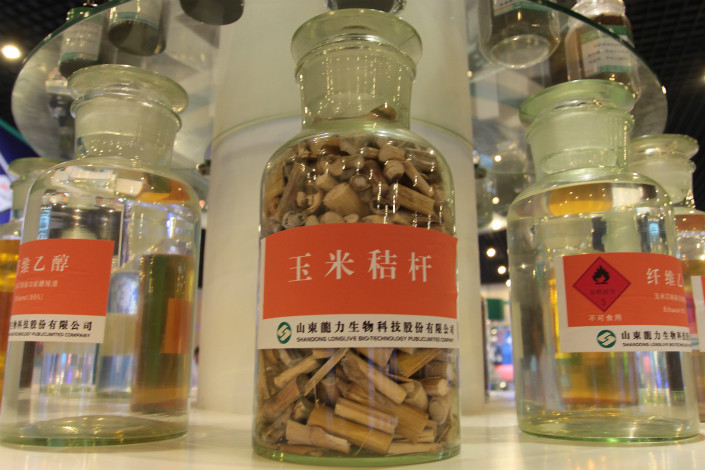 Longlive Bio-Technology’s products sit on display at a science and technology expo in August 2010. Photo: VCG

A Shenzhen-listed biotech firm that defaulted on trust loans packaged into wealth management products (WMP) that were sold on China’s biggest online wealth management platform has broken its pledge to repay the debt in installments and is being investigated by the securities regulator for false accounting.

The financial troubles engulfing Shandong Longlive Bio-Technology Co. and the failure of the involved financial institutions to carry out due diligence, underscore the risks in the shadow banking industry that the government is trying to contain. So far, a third-party rescue has failed to materialize, a sign that financial institutions may be starting to heed warnings from the authorities not to bail out investors in WMP that go bad, especially when they involve privately owned companies.

“It’s no surprise to see defaults like this given that the government has made its intention clear to tighten regulations on wealth management products and to stop institutions from offering implicit guarantees” to investors, said Ivan Chung, head of greater China credit research and analysis at Moody’s Investors Service.

“However, these defaults need to be looked at on a case-by-case basis and see what the spillover effects might be,” he said. “The government is still likely to step in in the event of an extreme case that could trigger a systemic risk. That’s the bottom line.”

Shandong Longlive, which makes a range of functional saccharides and sweeteners for human and animal consumption, was founded by Shandong businessman Cheng Shaobo in 2001 and listed in Shenzhen in 2011. In late 2016 and early 2017 it took out two loans from Zhonghai Trust Co., a trust company that is a joint venture between China National Offshore Oil Co. (CNOOC) and China International Trust and Investment Corp. (Citic Group), two state-owned companies.

The first, a one-year loan of 138 million yuan was due to be repaid on Dec. 7, 2017, and the second, a 12-month loan of 89 million yuan, was scheduled to be paid back in on Feb. 9. Brokerage Datong Securities Co. packaged the debt into two WMPs, Lucky Together No. 9 and Lucky Together No. 10, and sold them via the wealth management platform of Shanghai Lujiazui International Financial Asset Exchange Co., known as Lufax, an affiliate of Ping An Insurance Group, one of China’s top life insurance companies.

The WMPs were snapped up by investors, individuals with a low-risk profile prepared to put in at least 1 million yuan each. They were attracted by assurances that the products were safe, a return of 6.7% that was nearly four times higher than bank savings rates, and the fact that the borrower was a Shenzhen-listed company with a good profit record.

The first public indication of trouble came on Nov. 28, when the company’s shares were suspended from trading on the Shenzhen Stock Exchange at 8.74 yuan. The stock had surged from just over 9 yuan to 12.35 yuan in four days to Sept. 18, but gradually slid all the way back down in the subsequent two months.

Longlive admitted on Dec. 18 that it had defaulted on the 138 million yuan loan due, and informed shareholders that eight bank accounts containing 4.41 million yuan have been frozen. Caixin learned that Datong Securities had also frozen some of the company’s real estate assets. The default also put the repayment of the second loan of 89 million yuan at risk.

Investors could have been forgiven for thinking they would be bailed out ­— in the past, financial institutions involved in the default of wealth management products have managed to cobble together a rescue package, often under the guidance of the local government where the borrower is based. In January, Yunnan State-Owned Capital Operation Co., an investment and fundraising vehicle for state-owned enterprise reform owned by the Yunnan provincial government, magically found the money to repay almost 1 billion yuan in capital and interest on trust loans that had gone into default.

Initially Lufax, which is planning an initial public offering (IPO) in Hong Kong that could value the company at around $60 billion, proposed advancing the outstanding funds to Longlive so that it could repay the loans and allow investors in the WMP to get their money back, sources with knowledge of the matter told Caixin. But financial regulators in Shanghai blocked the proposal on the grounds that such wealth management platforms are not allowed to offer implicit guarantees of repayment to investors.

Eventually, after discussions with Lufax and Datong Securities, Longlive promised to pay back the capital and interest on its loans by the end of April in six installments. Although it made the first payment of 60 million yuan, it failed to make the second due on Feb. 9 and the third, due on Feb.12. As of March 6, Longlive has repaid 37% of the debt from the two loans.

People familiar with the matter told Caixin that Longlive may not be able to follow the repayment schedule and won’t be able to make further payments until it secures additional funds.

Faced with significant losses, investors directed their anger at Lufax. On March 5, some investors gathered outside the company’s headquarters in Lujiazui, Shanghai’s financial district, to protest and demand their money back. They accused the company of false advertising and claimed that the promotional brochures for the products misled them into believing the investments were safe.

Lufax’s brochure for both Lucky Together No.9 and No.10 claimed that Cheng, Longlive’s chairman and biggest shareholder, was personally guaranteeing the loan. He held 18.27% of the company’s shares, a stake valued at 1.2 billion yuan as of Sept. 30, 2016. It also claimed Cheng had no other debts and no other outstanding guarantees as of Aug. 8, 2016, citing information from the Credit Reference Center of the central bank.

However, statements from Longlive showed that in fact Cheng had already pledged 80% of his stake as of July 2016 and by September had pledged 99.9% of his holding, with 96.9% pledged for personal financing purposes. In reality, Cheng was in no position to guarantee the two trust loans.

In addition to its financial problems, Longlive is now being probed by the China Securities Regulatory Commission (CSRC). The watchdog announced its intention to carry out an investigation on Jan. 11 in the wake of statements the company made to the Shenzhen Stock Exchange about its failure to disclose the two trust loans in its 2017 first-half earnings report.

Investors are demanding someone be held responsible for their losses and for failing to carry out the necessary due diligence on Longlive, which is itself facing allegations of misconduct including false accounting and irregularities in its information disclosure.

Datong Securities, which charged Longlive a fee of 3.5% of the value of the trust loans, has not commented publicly since a statement in mid-December that it had sent staff to Longlive’s offices to collect the debt and was taking legal measures to deal with the matter. But investors say Datong has failed in its duty of due diligence on Longlive, and didn’t fulfill its obligation to carry out measures in securing the funds of investors in time.

Lufax, which earned a commission of 0.2% of the value of the wealth management products, told Caixin that as an online platform selling financial products it should not take primary responsibility. However, investors say the company failed to live up to claims in its promotional material that it had “exceptional risk control” and misled them into believing the two products were low-risk investments.

Zhonghai Trust is also under the spotlight for violating regulations that require all trust companies to register details of their lending with the national centralized commercial and consumer credit reporting system, which is run by the central bank’s Credit Reference Center. Zhonghai Trust failed to register the loans, and as a result the first loan was not included in the 2016 annual report and accounts prepared by Longlive’s auditors, BDO China Shu Lun Pan Certified Public Accountants LLP.