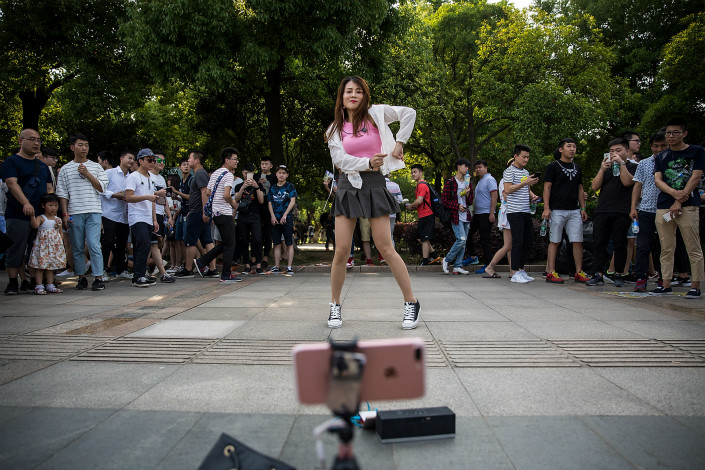 A webcasting hostess uses a smartphone to create a live webcast during the Douyu Festival on May 29 in Wuhan, Hubei province. Photo: VCG

China’s two major livestreaming sites have clinched a total of $1 billion in their fundraising rounds this week, a development that analysts said could help pave the way for their respective initial public offerings (IPOs).

Douyu, touted as China’s version of Amazon’s Twitch platform, announced it had completed a $630 million exclusive cash deal with Tencent.

With the funding, “Douyu will work with Tencent in all aspects to expand in the online streaming sector, including both gaming and livestreaming businesses,” Douyu founder and CEO Chen Shaojie wrote on his microblog.

Douyu, whose name literally means “fighting fish” in Mandarin, was founded in 2014 by Wuhan Douyu Network Technology Co. The platform started off broadcasting online-game matches before streaming other content, such as cooking lessons and makeup tips.

Douyu hit “unicorn” status — a term for startups that have valuations over $1 billion — in June after receiving funds from backers that included Tencent and Sequoia Capital.

Following the completion of this latest transaction, YY will maintain control over Huya, while Tencent obtains the right to purchase additional shares at market value, up to 50.1% of the voting power in the company, according to a company statement.

On Tuesday, YY said it will spin off Huya for a separate New York listing by issuing American Depositary Shares, while Douyu is reportedly planning for an IPO in Hong Kong.

Market watchers said that as competition in the capital-intensive livestreaming sector heats up, players are increasingly eager to list their shares and get funding for expansion while business is strong.

Inke is also reportedly mulling floating on the Hong Kong bourse this year to raise $300 million. The streaming app allows viewers to send virtual gifts to hosts of live videos.