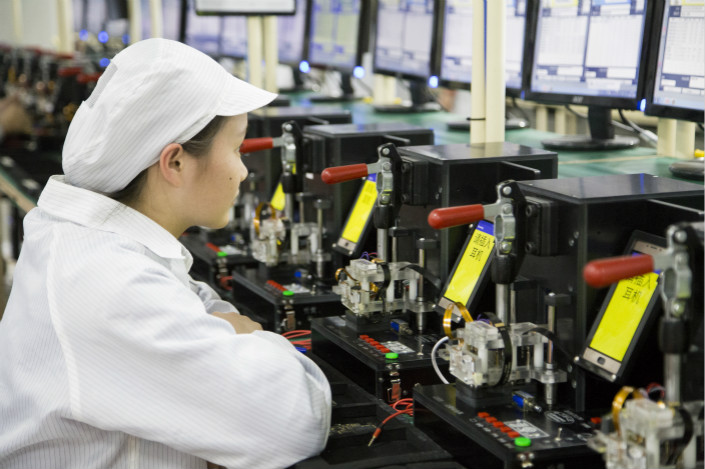 A worker sits at a Gionee mobile phone assembly and testing workshop in the southern city of Dongguan, Guangdong province, on April 14. Photo: VCG

“We are indeed talking to potential strategic investors regarding fundraising, but not Hisense,” a company spokesman told Caixin Global, declining to offer further details.

The remarks came as Chinese media outlets reported that Hisense Co. Ltd., a major maker of appliances and electronics based in Qingdao, Shandong province, is expected to acquire Gionee.

In January, Gionee Chairman Liu Lirong acknowledged that the company is embroiled in a financial crisis due to excessive spending on investment, operations and sales in 2016 and 2017. Chinese media reports said the company is almost 10 billion yuan ($1.6 billion) in debt.

Liu said Gionee planned to rope in new strategic partners or sell off assets to repay its debts.

Gionee’s liquidity crunch prompted its major suppliers to stop supplying materials, and some have asked the courts to freeze a portion of its assets, local media reported.

It’s unknown if these difficulties will hamper Gionee’s ambitious overseas expansion plans for this year.

In January, the company said it will expand its footprint to more Southeast and Central Asian countries in 2018. It now sells its phones in India, the African markets of Nigeria, Kenya and Egypt, as well as the Asian markets of Nepal, Kazakhstan and Georgia.

Gionee is one of the more globally diverse players in a crowded field of Chinese smartphone brands, and was also one of the first to discover the Indian market, which has since gone on to attract many of its rivals. But the company has stumbled in the past year as it was overtaken in India by more market-savvy Chinese rivals such as Xiaomi Inc., and sales in its home market slipped.