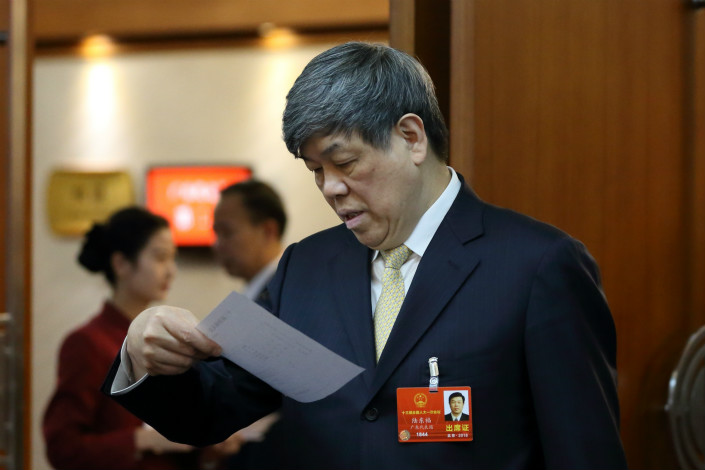 China’s railway operator will continue to push forward a reorganization plan that could include an eventual initial public offering, the party secretary of China Railway Corp. (CRC) said.

“The railway sector will step up the pace of market-oriented reforms, which include listing on stock exchanges, bond-to-stock programs and inviting more private capital to enter the sector,” said Lu Dongfu — who is also chief manager of CRC — in an exclusive interview with Caixin.

As part of nationwide state-owned enterprise reforms, Beijing spun off the operations arm of the now-defunct Ministry of Railways to form CRC in 2013.

Lu made the remarks on the sidelines of the country’s annual legislative meeting over the weekend. His comments came after CRC signed a “strategic” agreement in January with the Shenzhen Stock Exchange, in which the latter will help CRC carry out plans including “debt-to-equity swaps and asset securitization reforms.”

China’s railway sector has developed rapidly over the last few years and now the country boasts the world’s largest rail network. As at the end of 2017, China had 127,000 kilometers (78,900 miles) of tracks, including 25,000 kilometers of high-speed rail lines.

However, this years-long investment frenzy means that CRC has taken on a lot of debt. Reorganization plans, such as listing in the public market, are expected to help the company alleviate the issue of its huge debts, which stood at 4.72 trillion yuan ($749 billion) as of the first quarter of 2017.

In the interview, Lu also said CRC will continue to roll out more projects “that are attractive to private investors.”

The 269-kilometer rail line, which would link Zhejiang province capital Hangzhou with the provincial city of Shaoxing, has been hailed as a major milestone in the operator’s program to lure more private funding into the sector. CRC has said it will allow the rail line’s operator to set its own ticket prices.