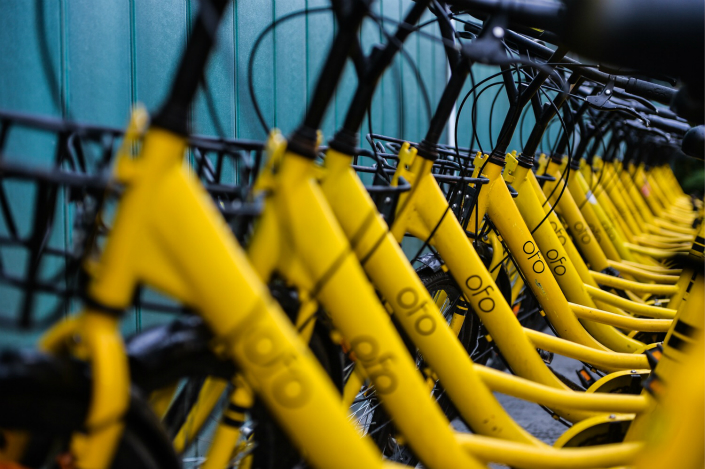 Shared Ofo bikes are lined up on a Beijing street on Sept. 26. Photo: IC

Bike-sharing leader Ofo Inc. has secured $866 million in its latest fundraising round.

The new funding arrived at a time when Ofo is dealing with investor infighting and the fallout of a merger with archrival Mobike that never materialized.

The funding round, using a combination of debt and equity, was led by Alibaba Group Holding Ltd., with participation from Haofeng Group, Tianhe Capital, Ant Financial and Junli Capital, the company said in statement on Tuesday.

The move came after Ofo, which reportedly has been under financial pressure since mid-2017, began to seek funding from Alibaba and its affiliated financial arm, Ant Financial Services Group, in November.

But that effort has been shelved due to an internal conflict between the management team of Ofo and its top investor, Didi Chuxing, China’s leading car-hailing company, Caixin has learned. Sources said Didi has sought to use its veto power to block new investors from entering the company.

With the Alibaba-led funding, the cash-strapped Ofo is expected to continue a “proxy war” with Beijing Mobike Technology Co. Ltd., whose top investor is Internet giant Tencent Holdings Ltd., meaning that a merger between the two won’t likely happen anytime soon.

In January, Mobike raised around $1 billion in a fundraising round, market sources have told Caixin.

Talks about a possible Mobike-Ofo merger took place in October, pushed by Tencent and Didi.

But as of December, Caixin learned from sources close to the matter that the merger plan was suspended due to opposition from both management teams, who were concerned that any deal would grant Didi, which has a 25% stake in Ofo, greater control of the new company.

Didi — which has denied such widespread rumors — has made its own foray into the bike-sharing business in hope of supplementing its car-hailing services.