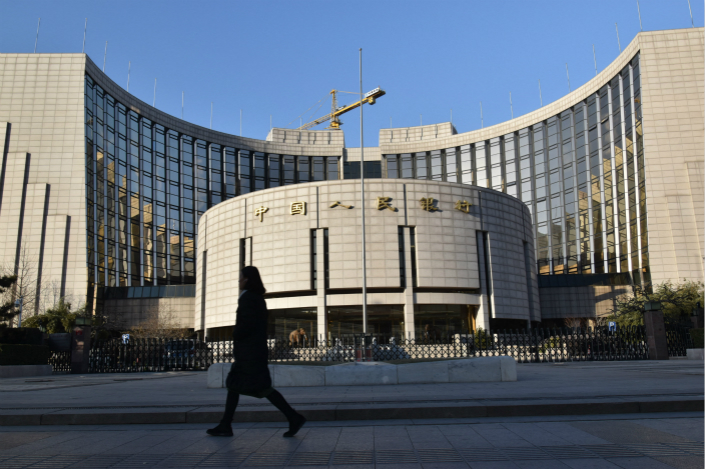 The People's Bank of China headquarters is seen in Beijing. Photo: VCG

(Beijing) — The People’s Bank of China (PBOC), the central bank, is set to gain new powers as part of a series of proposals published by the government on Tuesday to merge the country’s banking and insurance watchdogs.

The announcement came after months of speculation about how authorities will restructure the fragmented financial regulatory framework to cope with the dramatic expansion of these industries and the risks they have created.

Financial institutions exploited gaps and loopholes in the rules that allowed them to invest in each other, often through opaque and complex webs of companies, and to create innovative and risky financial products. They helped fuel a massive expansion of the “shadow banking” system, which benefited from lax oversight and a deficient regulatory framework, fanning concerns about financial stability.

Xu Zhong, director-general of the PBOC’s research bureau, explained the new regulatory system and the enhanced role of the central bank in an analysis published on Caixin’s Chinese-language website on Tuesday. Below is a translation of key excerpts from his article (link in Chinese):

The National People’s Congress on Tuesday reviewed the “Plan on Deepening the Reform of the Party and State Institutions,” which included a major restructuring of the financial regulatory framework that highlighted the following three aspects:

1.The merger of the CBRC and the CIRC complies with the direction and trend of the broadening scope of activities of financial companies.

Unified regulation of the banking and insurance industries is an inevitable choice that follows the general direction of the broadening scope of business carried out by financial companies.

China’s banking and insurance products have developed overlapping and similar functions. For example, in addition to their traditional function of providing protection, life insurance policies have taken on an additional savings function that has made them similar to bank deposits. At the same time, we have seen rapid growth in bancassurance. Chinese banks have become an important channel for the sale of insurance policies, which has led to strong growth in the premium income and assets of the personal insurance industry in recent years.

Unified regulation of the banking and insurance sectors will allow the government to integrate its regulatory resources and make full use of the regulators’ expertise.

There are similarities between the regulatory concepts, rules and tools of the banking and insurance industries; the requirements for regulatory resources and expertise are also similar. For example, the second-generation solvency supervision system is a risk-oriented system and sets different capital requirements for different categories of risk underwritten by insurance companies. This is similar to the capital adequacy requirement in the banking industry.

Given the shortage of resources and professionals in China’s financial regulatory system — particularly in terms of insurance supervision personnel at local levels — unified regulation is conducive to bringing synergy, centralization and integration of regulatory resources, giving full play to the capabilities of regulatory professionals, and improving the quality and efficiency of regulation.

2.Separating the functions of development and supervision, and separating regulation and enforcement will enable the regulator to focus on enforcement, which will improve the professionalism and effectiveness of regulation.

An important reason for the emergence of financial disorder and localized financial risks in China in recent years is the conflicting goals of regulators who are responsible for both development and supervision.

In its “Financial System Stability Assessment of China,” the International Monetary Fund pointed out that the chaos in the financial industry is closely linked to regulators’ conflicting responsibilities of supervision and promoting development.

This situation provides important background for the explicit requirement put forward by General Secretary Xi Jinping at the Fifth National Financial Work Conference (held in July) that the two responsibilities should be separated.

Consequently, a decision was made at the conference to reform the financial regulatory framework, separate the functions of development and regulation, and let the PBOC take on the role of promoting financial development. That will allow regulators to focus on supervision, which will improve the professionalism and effectiveness of regulation.

The PBOC will be responsible for the formulation of a development strategy for the financial industry, and the relevant financial regulators will no longer prepare their own plans. The central bank will also coordinate legislation for the financial industry so that it will be unified rather than each regulator doing things their own way. This will also avoid any conflicts between different laws and delays in preparing legislation. In addition, the PBOC will coordinate the security review of mergers and acquisitions in the financial sector and the industry’s opening up to foreign investors.

Separating the responsibilities of regulation and enforcement and giving the PBOC the power to formulate policies governing the financial industry takes two main factors into consideration.

First, taking away regulators’ right to make the rules reduces the discretionary power of the departments responsible for enforcement and increases policy transparency. This will ensure that regulators focus on enforcement and prevent them deviating from their objectives.

Take as an example universal insurance, which has grown rapidly in recent years. The chain of funding can extend across the banking, securities and insurance sectors. It is in compliance with the regulations of each individual regulator, and the risks involved may be seen as controllable from that regulator’s point of view. However, viewed from an overall regulatory perspective, the potential risks and hidden dangers may have posed a threat to the stability of the financial system.

Therefore, to maintain the overall stability of the financial system, the central bank is given responsibility for drafting major financial regulations with the goal of ensuring the stability of the overall financial system. (The central bank) will formulate rules for products that cross markets and regulatory jurisdictions to penetrate their complexity and identify real risks. Unifying regulations and standards for products of the same kind will provide functional regulation, ensuring that a specific field of business is overseen by the most qualified and knowledgeable professionals.

3.Strengthening the PBOC’s role in macroprudential management and implementation of the “three coordination tasks.”

The mainstream practice among international regulatory reforms since the 2008 global financial crisis has been to strengthen central banks’ macroprudential management function, and build a complete and effective macroprudential policy framework.

The Fifth National Financial Work Conference explicitly called for the strengthening of the PBOC’s role in macroprudential management and preventing systemic risks. In the “Suggestions by the Central Committee of the Communist Party of China for the Making of the 13th Five-Year Plan for Economic and Social Development,” General Secretary Xi proposed reforms to “coordinate the regulation of financial institutions and financial holding companies of systemic importance, … coordinate the regulation of key financial infrastructure facilities … and coordinate the comprehensive statistical work of the financial industry.”

Strengthening the central bank’s role in macroprudential management and implementing the “three coordination tasks” are fundamental in winning the battle to prevent and defuse major risks.

The PBOC will coordinate the formulation of regulations for, and the identification of, financial institutions and financial holding companies of systemic importance. It will have the power to investigate and mete out punishment to the institutions and will be able to veto hiring and firing of senior executives.

The PBOC will coordinate the planning, construction and regulation of key financial market infrastructure facilities (including registration of financial assets and custodian services). It will have the power to block the formulation of and revisions to the main business regulations of financial exchanges.

The PBOC will also coordinate the statistical work of the financial industry. When it comes to major issues such as macrocontrol and systemic risks, the PBOC will have the power to carry out direct data collection as needed to perform its duties.