China to Give Century-Old Laos Hospital New Lease of Life 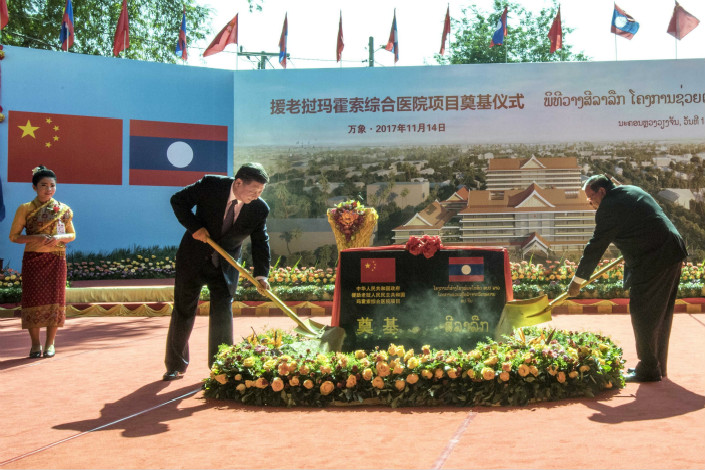 Chinese President Xi Jinping and Laos President Ben Yang participate in the groundbreaking ceremony for a hospital building in the capital of the Southeast Asian country. Photo: Xinhua

China has signed an agreement with Laos to renovate a hospital in Vientiane, one of Beijing’s largest overseas health care investments, as the government seeks to diversify “Belt and Road” initiative projects.

China’s Ministry of Commerce on Wednesday said that construction will start in October of a new 600-bed hospital building on the site of the century-old Mahosot Hospital along the Mekong River in the capital of the Southeast Asian nation.

The new building, which will have eight floors and an area of 54,000 square meters (581,000 square feet), is scheduled to be completed in three years.

In terms of both investment and construction scale, the building will be one of the largest health care projects that China has involved itself with overseas, according to the Ministry of Commerce, which did not disclose any specific financial details.

The project can help the two sides “promote the Belt and Road initiative,” the ministry said.

The Belt and Road initiative, inspired by the ancient Silk Road trade routes, was raised by Chinese President Xi Jinping in 2013 and has developed into an all-out national strategy to beef up infrastructure to better connect China with Europe and Central Asia by land, and with Africa and Southeast Asia by sea.

The projects have mainly focused on infrastructure, such as roads, railways, ports and industrial parks. In Laos, for example, ongoing Belt and Road projects include an industrial park, a satellite and a railway that will help connect the landlocked country with Thai ports.

But the kinds of projects involved in the initiative have gradually become more diverse, and now include those dealing with social issues. Belt and Road health care projects have not only seen Chinese funds and technology heading abroad, such as the launch of a hospital in Kyrgyzstan in May 2017, but have also seen improvements to China’s medical facilities.

In September, the Guangzhou city government set up a fund of more than 10 billion yuan ($1.6 billion) to jointly build three health care facilities in cooperation with Spanish medical institutions in the southern city.