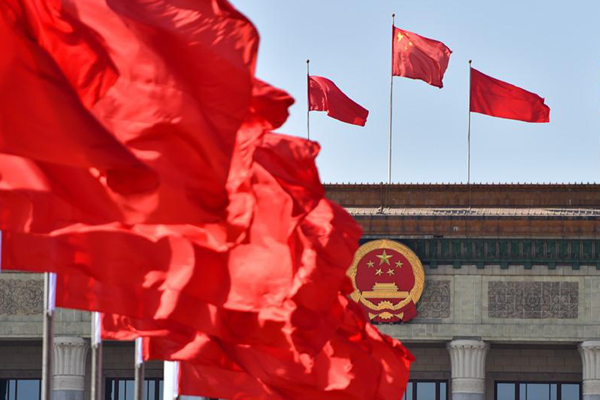 The National People’s Congress, China’s legislature, is expected to approve on Saturday a sweeping plan to shake up the government. Photo: VCG

(Beijing) — China has introduced a major overhaul of the government aimed at greater integration of central government agencies and better coordination under the ruling Communist Party and its military to tackle pressing issues such as a slow economy, environmental degradation and volatility in the market.

The National People’s Congress (NPC), the country’s legislature, is expected to give its seal of approval on Saturday to a sweeping plan to shake up the State Council — China’s cabinet — under which the number of agencies will be set at 26, down from the 52 it had in 1982.

The reorganization, the eighth since the country’s reform and opening-up in the late 1970s, stands out for not only shaking up ministries and agencies within the State Council, but also for creating more coordination among the council, the ruling Communist Party and the military, analysts said. For instance, the newly established top government anti-corruption National Supervisory Commission will work closely with the Central Commission for Discipline Inspection, the party’s top graft-fighting organization, according to the approved plan. Also the Ministry of Veterans Affairs will be established to facilitate coordination with the army to protect the interests of military personnel and their families.

The reshuffle comes amid a slowing economy, challenges stemmed from market volatility, innovation, and a social shift, as well as constraints in environmental protection and natural resources.

Another notable change is the merging of the country’s banking and insurance watchdogs — the China Banking Regulatory Commission and the China Insurance Regulatory Commission. However the move falls short of calls for greater integration in the regulation of the country’s banks, insurance industry and stock markets. Other highlights are the creation of two “super ministries” — the Ministry of Natural Resources, and the Ministry of Ecological Environment — to tackle issues linked to environmental protection and conservation

Below are some of the major changes, their implications, and analysts’ views of the moves.

China’s banking and insurance regulators are slated to merge into a single commission, the China Banking and Insurance Regulatory Commission, while the central bank will be responsible for drafting laws and regulations in the sector, according to an official document that was submitted to the NPC for review.

The restructuring of the financial regulatory system aims to “solve the problems in the existing framework, including unclear regulatory responsibilities, overlapping regulation, and gaps in regulation,” State Councilor Wang Yong said in a report to the NPC explaining the overhaul plan.

“The plan addresses the financial industry’s new risks,” said Lai Xiufu, NPC deputy and head of the Hubei Banking Regulatory Bureau. “The government has not shied away from adjusting power and interest” with this plan, he added. “There is no perfect financial supervision model,” said Zhang Jingchun, chief banking analyst at China Everbright Securities and former employee of the China Banking Regulatory Commission (CBRC). “No matter what kind of framework is implemented, the key lies in whether it can promote information sharing and collaboration among regulatory agencies.”

Xu Zhong, director-general of the PBOC’s research bureau, in an analysis piece published on Caixin’s Chinese-language website, wrote: “The merger of the CBRC and the China Insurance Regulatory Commission (CIRC) complies with the direction and trend of the broadening scope of activities of financial companies.”

Over the years, a growing overlap has surfaced in banking and insurance products. Some life insurance products, for example, have gained functions similar to bank deposits by offering a steady return. Banks have also become important channels for selling insurance products. Some say there is a simpler reason for the merger. “The most direct reason or the merger is that the CIRC has no chairman,” an employee of the insurance regulator told Caixin. Former chairman Xiang Junbo, who headed the CIRC from October 2011, was put under investigation in early 2017 and dismissed later in the year for “serious violations of party discipline,” a phrase that usually refers to graft.

There are nearly 25,000 employees at the CBRC and just over 3,000 at the CIRC. The former supervised more than 4,000 lenders with 252 trillion yuan ($39.8 trillion) in total assets as of the end of 2017. Established in 1998, the CIRC oversees a sector with more than 16.7 trillion yuan in assets. The CIRC’s relatively small size means that it is a relatively easy regulator to merge with because it has limited power to put up a fuss, multiple regulatory personnel told Caixin.

The merger of the top commerce, food and drug regulators and the quality inspector is a tale of how regional government reforms have pressured the national level to overhaul itself.

The newly created State Market Regulatory Administration will handle market-related issues, including company registry, food safety and drug approval, which has been the work of its three components: the State Administration for Industry and Commerce (SAIC), the China Food and Drug Administration, and the General Administration of Quality Supervision, Inspection and Quarantine.

It will also take over the anti-monopoly responsibilities that were previously shared by the National Development and Reform Commission, the Ministry of Commerce and the SAIC.

The move follows a pattern that started in Shenzhen in 2009, which sought to merge some market supervisors and eventually formed the city’s Market and Quality Supervision Commission in 2014 to conduct market supervision, quality inspection, and food and drug regulation.

Several regions, including Tianjin, Shanghai, Guangdong and Zhejiang provinces, copied Shenzhen’s reforms. Currently, 70% of China’s counties and 25% of its cities have established such an institution, said SAIC Minister Zhang Mao.

The latest change at the national level “isn’t unexpected,” said Wang Jing, a professor at the Chinese Academy of Governance who studies administrative laws.

Wang said that the local regulators that have completed the merger have been appealing to the central government to adjust the structure as well, as their three-in-one bodies were no longer able to cope with the national supervisors, which were still separate agencies.

Experts said that the combination of smaller agencies on market supervision will help improve efficiency and protect consumer rights, but further coordination remains to be improved.

The SAIC’s Zhang said that when the regulators scattered, a consumer found it hard to complain even about a pancake, because problems of pricing, food safety and quality involved different government agencies.

Wang Tian, a lawmaker who is also the president of department store chain operator Better Life Commercial Chain Share Co., said that the reform can help ease the burden on companies, as they had to handle inspections from numerous agencies.

But the merger is just the first step to improving efficiency. If coordination among the three components can’t be achieved, cross-agency buck-passing will only become internal buck-passing, said an expert who asked not to be identified.

Besides market supervision, the State Market Regulatory Administration will also take over the anti-monopoly responsibility that was previously shared by the National Development and Reform Commission, the Ministry of Commerce and the SAIC.

The National Development and Reform Commission, or NDRC, the country’s top economic planner, has seen some of its power taken away and reassigned to other government agencies.

Deng Haiqing, a chief economist with JZ Securities, said the NDRC has followed its recent practice of decentralization. It is also in line with the latest reform’s theme, which emphasizes the concentration of functions instead of industrial sectors in a government body

“Generally speaking, the latest round of government shakeups does weaken some of the NDRC’s functions on the micro fronts,” a source close to the NDRC told Caixin. He said shifting the NDRC’s regional economic planning power to the new Ministry of Natural Resources is a good move that can resolve disputes among the various authorities that have overlapping power over land resources. Since 2002, the government has been trying to integrate the powers in regional development, urban-rural planning, and land planning, which are separately administered by different authorities. But the NDRC, the Ministry of Housing and Urban-Rural Development, and the Ministry of Land and Resources have conflicting ideas in this drive. The NDRC insisted it has the leading role in the country’s regional planning, but the other two ministries are not willing to follow, according to the source. The Ministry of Natural Resources is expected to make comprehensive decisions in terms of resource and space allocation.

The new Ministry of Natural Resources is expected to better protect country’s natural resources and plan the use of them accordingly. It will become the entity holding the ownership of natural resources collectively owned by all Chinese nationals.

The new ministry will take over responsibilities from those ministries, managing resources from mining, forest, grassland, wetland to oceans, except arable land and water sources. Land and water resources will remain in the hands of ministries of Agriculture and Water Resources respectively.

In addition to its vested duty of the environment protection, the Ministry of Ecological Environment will be also tasked with reducing greenhouse gas emissions and dealing with climate change, tasks which had been handled by the NDRC.

Ma Jun, environmentalist and director of the director of Institute of Public and Environmental Affairs, said the new Ecological Environment Ministry will help reduce the industrial discharges and give future support to the fight against air pollution.

However, experts are divided on whether the natural resources and ecological environment ministries should be separate.

Zhang Wenkui, an expert on the Development Research Center of the State Council, said the separation conveys a clean split between owners and inspectors, which should serve as a basic rule in the government management.

Huang Xiaohu, a researcher at the China Land Surveying and Planning Institute, argued that the environmental protection is closely connected to how nature resources will be allocated and harnessed. “A lot of pollution occurred at the sources. If problems happened to the sources, subsequent regulation becomes hard,” he added.

The National Supervisory Commission will replace the Ministry of Supervision and State Anti-Corruption Bureau, two anti-corruption agencies that have until now operated under the State Council. The new commission is to serve as the top government graft-fighting organization to work along with Central Commission for Discipline Inspection, the top anti-corruption establishment within the ruling Communist Party.

The supervisory body, which has been written into the revised constitution, was approved at the annual session of the NPC on Sunday. The launch of the commission, the most fundamental change in the anti-corruption system in 20 years, came after the congress decided to expand nationwide the pilot programs, launched in Beijing, Shanxi and Zhejiang in the second half of 2016 to test such a supervisory body for better coordination on anti-corruption operations.

Past fights against official corruption have been plagued by both fragmented enforcement and the overlapping portfolios of several agencies, according to Li Jianguo, a vice chairman of the NPC. The anti-corruption commission under the centralized leadership of the party was aimed to integrate anti-corruption resources at government, the party and prosecutor’s office under one umbrella led by the party. “The combination of resources, coordinated execution and enforcement are like a fist — more powerful than a finger,” he said

Ministry of Agriculture and Rural Affairs

The launch of the Ministry of Agriculture and Rural Affairs has been long-awaited because the idea of a “super agriculture ministry” has been promoted by scholars for years to tackle challenges resulted from China’s rural-urban divide and rapid urbanization.

The new ministry’s creation is in line with policies to give priority to development of agriculture and coordination in both rural and urban development, according to State Councilor Wang Yong. The ministry will also facilitate modernization of rural villages and agriculture and improvement well-being of farmers, he said. The ministry should be given more portfolios in the future take good care of rural residents in access to basic education and social security, said Lou Jiwei, head of the National Council for Social Security Fund.

As the new ministry is likely to have more resources, it must stay wary of a potential increase in red tape within the ministry, said Chen Jingjing, a rural specialist in Beijing.