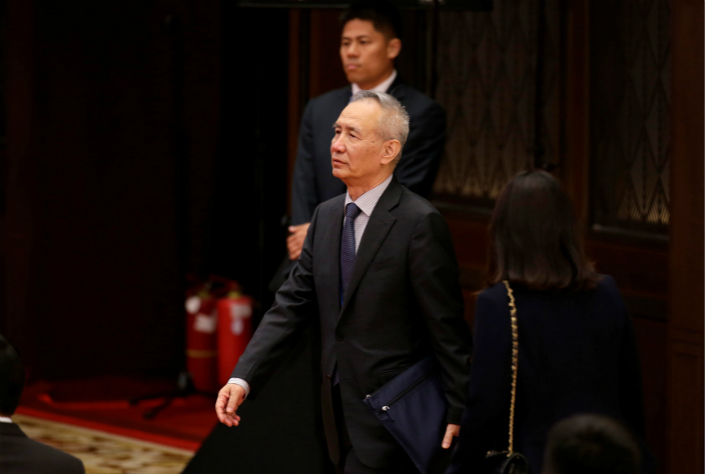 Liu He, vice chairman of the National Development and Reform Commission, arrives at a news conference held by President Xi Jinping in Beijing on May 15. Photo: VCG

China’s plan for the biggest overhaul of Communist Party and government institutions in more than a decade was hailed by Liu He, a key economic adviser to President Xi Jinping, as a profound transformation required to strengthen the governance of the party over the long term.

In a 5,474-character commentary (link in Chinese) covering half a page in the People’s Daily newspaper on Tuesday, Liu reiterated the need to strengthen the party’s leadership and promote governance.

The article, “Deepening Reform of Party and State Institutions is a Profound Reform,” highlighted a series of weaknesses in the current structure of the party and government that Liu said have eroded trust in the government and thus require reform.

“Some party and government bureaucracies have overlapping powers and responsibilities, and this problem has become quite prominent,” Liu wrote. “The structure of some government organizations and division of responsibility are not rational, which has created deficiencies in regulation and efficiency, so the government must put reforms in place. There are also some areas where the functions of central and local governments are the same and the division of power and responsibility is not reasonable,” he said.

“Strengthening the party’s overall leadership is the core issue,“ Liu wrote. “Unlike previous reforms, which mainly involved government agencies and administrative systems, this is a comprehensive reform that involves the party, the government, the legislature, the judiciary, social organizations, institutions, the military, and central and local agencies.

“The reason why reform this time is so revolutionary is that it does not avoid the issues of rebalancing power and interests, but has managed to integrate traditional vested interests into a new interest structure,” he said.

Liu’s commentary was published hours before the government released details of sweeping proposals for an overhaul of ministries and state agencies, the eighth major revamp of central government agencies since the reform and opening-up policy began in 1978 and the biggest since 2003.

The plan involves merging regulators and ministries as well as creating new ones. Eight ministry-level agencies and seven deputy-ministry-level agencies will be cut, and eight new administrations will be set up. The banking and insurance regulators will be merged and put under the direct control of the State Council, and the People’s Bank of China will be given new powers to oversee and draft regulations for the financial sector.

A Ministry of Natural Resources and Ministry of Ecological Environment will be set up; a state market regulatory administration will be established to carry out nationwide supervision of pricing and enforcement of anti-monopoly laws; and a new immigration agency under the Ministry of Public Security will be formed to deal with passport and visa applications as well as border control.

The overhaul comes after amendments to the constitution were approved by legislators on Sunday, giving the go-ahead to the establishment of a National Supervision Commission, an anti-corruption “super body” supervising all public servants and village officials, and the removal of term limits for the country’s president and vice president, who could previously serve a maximum of two consecutive five-year terms.

“Deepening reform of the party and government bureaucracy is an inevitable requirement for developing and adhering to Socialism with Chinese characteristics in the New Era,” Liu wrote in Tuesday’s commentary, referring to the political theory of Xi Jinping, the general secretary of the Communist Party and president of the country.

“As the functional system of the party and state institutions are a crucial part of the socialist system with Chinese characteristics, they need to be constantly adapted and improved to respond to changes in the country’s economic foundation and social productive forces”